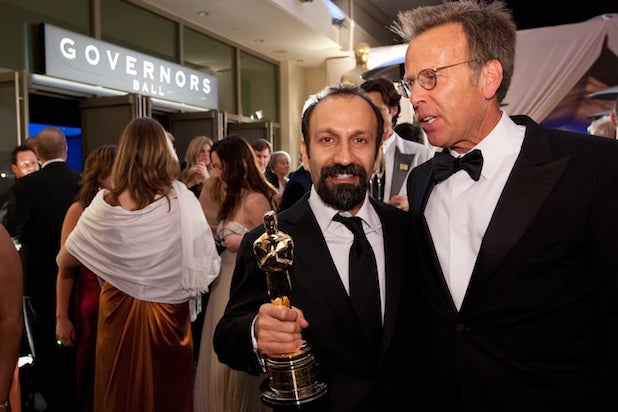 Directors who have films in competition for the Academy Award for Best Foreign Language Film will have more of a personal stake in the competition this year than ever before.

For the first time, the Academy will engrave the name of the director on the Oscar statuette given to the winning film, instead of just the name of the country of origin.

The change was approved by the AMPAS Board of Governors at the urging of Producers Branch governor Mark Johnson, who is heading the Foreign Language Film Award Executive Committee for the 13th time in 14 years. It was recently included in rule 13.IV.C of the 87th Academy Award rules posted on the AMPAS website, but went unnoticed until Johnson talked about it to TheWrap this week.

“We proposed it to the board, and they accepted it,” Johnson said. “So for the first time, the country’s name will be on the Oscar, but so will the director’s.”

The foreign-language Oscar officially goes to the country that submits the film, not the director who made it. But the director gets to accept and keep the statuette — a trophy that will now sport his or her name, in addition to the name of the country.

The change may not be the only one made to the foreign-language category this year, Johnson added in an interview shortly after Academy president Cheryl Boone Isaacs asked him to head the executive committee once more.

Johnson defended the current system, in which volunteer members from all branches of the Academy (“the general committee”) screen and score all the eligible films. The six highest-rated films go on a shortlist with an additional three films (“the saves”) hand-picked by a select executive committee. Additional committees chosen by Johnson and the Academy (“the phase-two committees”) then screen the nine shortlisted films over three days and vote to select the five nominees.

But, he said, additional changes could be imminent.

Nevertheless, I still do think there are a number of areas that we need to address. For the first time, we are going to add a committee in London for phase two. We hope to have 10 members there.

So the phase-two committees will consist of 20 members in L.A., 10 in New York and 10 in London?
Right. And assuming it all works, we’ll see if there’s a way to do it in other cities. I don’t know if we have enough members in San Francisco, but we should figure out a way to get more members to participate.

The big area, for me, still needs to be what goes into the funnel, not what comes out of it. How do we accept more movies, and how do we somehow deal with movies that should be submitted but aren’t? How do we as a committee accept them without overstepping our bounds?

I recently spoke to a director who has a very acclaimed film competing to be his country’s selection, and he said the man who headed his country’s selection committee was working actively against his film for what seemed to be political reasons. Is there anything you can do when you think a selection is made for non-artistic reasons?
That’s the biggest problem, and we’re trying to come up with a correct answer for it. Let’s face it, some committees are very political — maybe not government-controlled, but … I’ve always said, we can be involved in acknowledging or OKing the selection committee, but I don’t know how we get into the process of criticizing or overruling the decisions of the committees.

It’s not appropriate, for a lot of obvious reasons, for us to tell a country what to submit, or to say, “If that’s what you’re going to submit, we’re also going to take the other one.” [Longtime executive committee member] Ron Yerxa and I have spent a fair amount of time interviewing a number of significant Academy members, major film critics and voices from different foreign distribution companies, and we’re amassing all that data to figure out if somebody has a better idea. We’ve talked about plans like, do we take the winner of the five major film festivals, no matter whether it’s been submitted, if it’s a non English language film?

But then what do you do when all of a sudden France or Italy or Spain have two or three films in the mix? Will everybody else perceive that as unfair?

Remember, the award goes to the country. It’s accepted by the director, but the statute says the country.

But you want to change that, right?
I think it’s sort of odd in today’s world to think of a country as being responsible for a film. The best movie may be American-financed, directed by an Englishman, starring an Australian … It’s always been hard to describe the nationality of a film, and now it’s almost impossible.

It’s complicated, because it’s very significant for the national cinema in those countries. I know from the producer of “The Great Beauty” that the win for Italy was huge. If it had gone to the filmmaker and not the country, would they not have felt as connected to it? I don’t know.

Presumably, it’ll work retroactively as well. So somebody can bring it back and ask for their name on it.

I imagine that if that is made public, you’ll have a line of directors asking for new nameplates.
Yeah, I’m sure some of them would be very anxious to have that.

[Photo: detail of Asghar Farhadi‘s Oscar statuette, with Iran’s name but not the director’s.]

Is it possible that the conversations that you and Ron have had will lead to additional changes this year?
I think it’s possible. I was just asked to be the chair again, so we’re just putting together our executive committee. We haven’t had our first meeting. But I’d like to deal with some things head on.

The Academy is a huge organization, and things don’t always go quickly. Both phase-two and the executive committee saves took a long time to get enacted. But yes, I think there are a couple of things I’m going to hopefully get into the workings this year.

You know, everybody has their scheme for how to make it work better. I don’t want to say fix it, because last year things worked well, in my opinion, in the way I think they should work.

And yet there are still members of the general committee who feel that they’re being disenfranchised by the executive committee and the phase-two committees.
Oh yes, I still get some people who’ve been on the general committee for a long, long time, and they feel that their voting rights have been taken away from them. And I keep saying it’s not about what’s right for the voters — not that I want to disregard them, but it’s more about what’s right for the movies. The more people see them, and the more the broader Academy sees them, the better.

Last year, by the way, I wrote a personal e-mail to all the members urging them to join the general committee. I said, “You’re missing out on a great event, and it’s not nearly as taxing as you might think. Why don’t you try it? The worst that can happen is you opt out.” And it really boosted our [general committee] membership.

All Academy members now receive screeners of the five nominees, and everybody can vote in the category without the old rule that you had to see all five nominees in a theater. That change was also made in the documentary-feature category, where it seems to have led to a succession of softer, friendlier movies winning. Do you think it worked in foreign language?
It was a big concern for me, because that change happened during the one year that I wasn’t the chair. My fear was that people might see three of them and then vote, without seeing them all. But I believe, without saying specifically why, that my fears may have been overstated. What I know, informally and formally, I feel good about.

See video: How Eddie Redmayne, Felicity Jones Took on Stephen Hawking’s Love Story in ‘The Theory of Everything’ (Video)

You’ve now set a record for the number of entries for two years in a row – 71 two years ago, 76 last year. Are we looking at another record field this year?
I don’t know. I’m curious how many films we’re going to have.

[Laughs.] The best thing that happened for us, or the hardest thing, was the breakup of the Soviet Union. Suddenly we had eight countries submitting from what used to be one. We’ve also had a couple of other countries come in recently. I’m excited, there are some very controversial countries, but the problem is that they may have a film that they want to submit, but they don’t have a selection committee. We say, “Please put a committee together, quickly.”