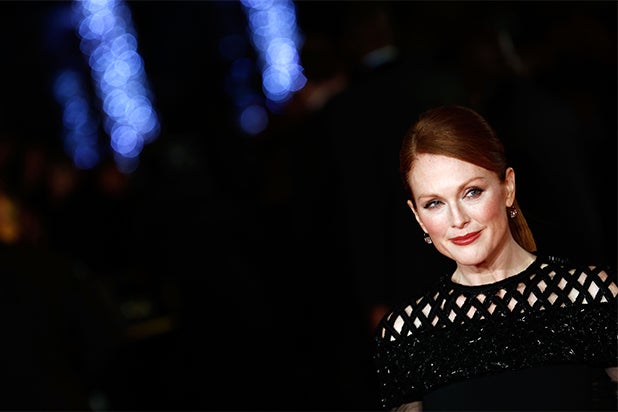 Julianne Moore knew one thing for sure when she was approached about “Still Alice” two years ago: the movie would not be made on the schedule that directors Richard Glatzer and Wash Westmoreland were talking about. No way.

A small indie drama about a college professor in her 50s who is diagnosed with early-onset Alzheimer’s? That was a tough sell if she’d ever heard one — and after working on dozens of indies in a near-30-year career that had landed her four Oscar nominations, Moore knew that it was going to take years, probably, to just get the project off the ground.

“They said, ‘We want to be able to go a year from now,’ and I said, ‘You’re not going to be able to,’” remembered Moore with a laugh. “I’ve been down this road a lot, and I know it takes a long time to assemble the budget for an independent film—it took five years to get the money for ‘The Kids Are All Right.’ So I didn’t think anything of it, until I suddenly got a phone call from them saying, ‘We’ve got it and we’re ready to go.’”

So began the unlikely journey of Still Alice, a tiny drama that has unexpectedly thrust Moore into the thick of the Best Actress race. Of course, there were still a few bumps in the road: Glatzer and Westmoreland wanted to start shooting last November, but Moore had the small matter of The Hunger Games: “Mockingjay Parts 1 and 2,” an enormous production that was scheduled to begin in September and run all the way to June. But that film’s producer, Jon Kilik, agreed to arrange shooting in a way that would give her March off, and Lionsgate agreed. “I had from March 1 to March 31,” she said. “That was it.”

It turned out to be enough. Moore began researching Alzheimer’s in the fall, watching documentaries and then speaking to physicians, researchers and women who’d been diagnosed with the early-onset form of the disease, first on Skype and later in support groups and long-term care facilities. “One of the things I said to Wash and Rich is that I didn’t want to represent anything onscreen that I hadn’t actually seen,” she said. “I didn’t want to be making anything up.”

But her research didn’t limit her, because Moore said she found a huge variety of behaviors and experiences when she spoke to patients. “They were very diverse, but certain things stuck with me. The idea of being in the shower and looking at the door, and knowing it was a door but not really knowing what you were supposed to do to get out. Having a moment when you realize that you are not the most reliable narrator of your own life. And the sense of isolation, and the loss of identity.”

She suggested specific behaviors: At one point the script called for her character to stare off into space, unfocused, but she thought it’d be more accurate to have her struggling with the small task of tying her shoelaces. But she also understood that the disease does not progress in a straight line: “One of the things everybody said loud and clear is that you have good days and bad days, days when you think you’re getting better and days when you’re not able to get out of that fog.”

On the set, meanwhile, she drew inspiration from Glatzer, who was confined to a wheelchair and communicated via an iPad because of the effects of ALS. (Co-directors Westmoreland and Glatzer are married.) “It gave a real emotional resonance to what we were doing, and an urgency,” she said. “Here is this couple that are making a movie about what it feels to deal with a degenerative disease. It made everybody think, and be alive with it, and not take it for granted. I think you feel closest to what’s most important when you’re closest to loss. And this was a story about acknowledging those things.”

The sense of urgency extended to this year’s Toronto International Film Festival, where Still Alice went in largely unheralded, but determined to find a distributor who would commit to a release by the end of the year. Moore thought that was unrealistic, too, up to the moment when she walked onstage at the end of the first screening.
“It was a Monday screening at 4:30, not an auspicious slot,” she said with a grin. “I did a little tiny press line, because nobody was there, and then we went to dinner. Came back at the end of the movie and went out onstage, and people went bananas. We were in shock.”

Sony Pictures Classics quickly stepped in, acquired the film and scheduled a 2014 release date. And that means an Oscar push as well—something that’s not exactly foreign to Moore, who was nominated for Boogie Nights in 1997, The End of the Affair in 1999 and both Far From Heaven and The Hours in 2002, putting her pretty high on the list of the greatest living actresses never to have won an Oscar. (She did win an Emmy for playing Sarah Palin in the HBO movie “Game Change.”)

“When you have a little movie and you don’t even have the expectation that you’re going to find a distributor right away, to be talked about in awards season is fantastic,” she said. “I keep saying topeople, is this actually happening? This was beyond the realm of any expectation I ever had for this movie.”

She grinned. “I think, actually, that I’m still in the stunned stage.”