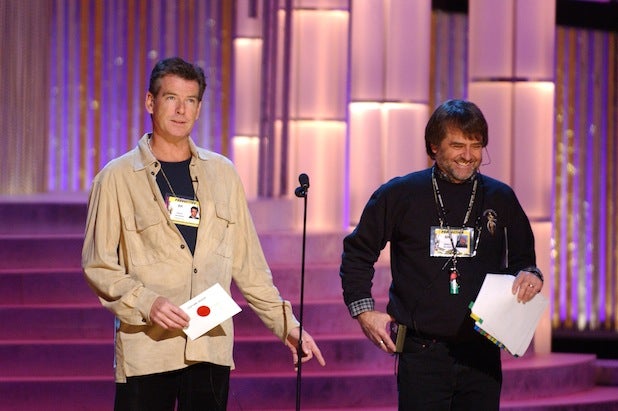 This story first appeared in OscarWrap: Down to the Wire

For 25 years, Dency Nelson was the first person every movie star saw when they came into the wings to serve as an Oscar presenter, and the first one every winner saw when they came offstage with their statuette. A veteran stage manager who once handled cue cards for Merv Griffin, Nelson was a steady, unflappable presence in the stage-right wings of the stage beginning with one show in 1985 and then from 1989 until 2013, his long run interrupted only once, when his father died just before the Oscars in 1994.

Many stars would break into big grins when they showed up for rehearsal and saw Nelson’s familiar face; on a show known for the care with which it always treated its celebrity guests backstage, he played a crucial role and had a ringside seat (not that he ever got to sit down) from which he could watch ecstatic winners, nervous presenters, charismatic performers and occasional trainwrecks.

Nelson retired after last year’s Oscar show, and now spends his time as an environmental, political and community activist. As this year’s show went into the planning stages without him, Nelson sat down with TheWrap to share a few memories, and talk about what he will miss most about it.

The first time you worked on the Oscars, were you star struck? The show is on a different level from the other awards shows you’d worked, isn’t it?

DENCY NELSON  Star struck, no, because I had the good fortune of having been around stars since my first days doing cue cards for Merv Griffin. That’s when I got my dose of star struck, because everybody came through that door. To sit with Peter O’Toole as he’s choosing which poem he wants me to put on cue cards for him to read as part of Merv’s 1982 St. Patrick’s Day show, and then the next day he shows up at Neary’s Pub in an antique tuxedo with a sprig of parsley in his pocket smoking a Gauloises in a cigarette holder… Talk about star struck, oh my god.

So by the time I did the Oscars, I had done a couple of things. But what you say holds true to this day: I don’t care what anybody says, the Oscars is still the biggest. And I hope it stays that way. I know the Academy is going through all these machinations to try to get back an audience that they’re never going to have again, because of the nature of television. The only real appointment TV is the Super Bowl. But of the things that we do, the awards shows, nothing has the sense of importance of the Oscars. I hope movie fans don’t get so jaded that it loses that special place, and I hope the Academy is judicious about decisions they make in chasing for ratings.

Over your 25 years with the show, you did 13 shows that Gil Cates produced — but in recent years, you’ve dealt with a new producer, or a new set of producers, almost every year.
From year to year, it really doesn’t matter who produces the show. As stage managers, our relationship is with the director. Now, there are producers I love. Of course Gil was special. He came in the first year and said, “Hey fellas, I don’t do this kind of show. You guys do. Help me out here.” That’s a good boss, and he continued that way.

Laura Ziskin was special, the two times she did the show. But then there have been years when those producers didn’t bother to talk to us or have any connection whatsoever. And you know what? That’s fine with me. I like to take care of that wing and the people who come to that wing. Let me deliver for the director, but primarily let me make sure these people are comfortable. And how great for me that I’m the first person they see as they exit that wing with their Oscar.

See photos: OscarWrap: Behind the Scenes With Jennifer Lawrence and Adele

Who did you particularly love seeing come into your wing?
Tom Hanks. Michael Douglas. Meryl Streep. Jennifer Garner and Ben Affleck. Harrison Ford, in his quiet way, always grateful for being shown what to do and where to be. Cameron Diaz — always had a crush on her. Penelope Cruz, and of course Salma Hayek — I always had fun with her.

And the person I will miss being happy for this year will be Cate Blanchett. My wife and I saw “Blue Jasmine” the first weekend it was out, and at the end of the movie we looked at each other and I said, “I’ll tell you right now, this is my first pangs of wishing that I was the first one she sees when she walks off the stage with her Oscar.”

Let’s talk about David Letterman. Not the most successful Oscar host, but somebody you’d known since you did the cue cards for his first morning talk show before he ever moved to late night.
When Dave got the job, Gil called me. “Dence, this Letterman’s an odd duck. He doesn’t want to talk to me. What do I do?” I said, “Yeah, he’s an auteur guy.” I never thought Dave was a good fit for the Oscars, and I really did feel bad for him.

But, you know, he does “Oprah, Uma,” stupid pet tricks, all those things. I know why he hosted the Oscars — because Johnny did it. But we all know that while Johnny had his style, he was still the consummate emcee. That’s never Dave. Not on his show, not in his social life. He is what he is, and that’s why we love him so much. And that’s pretty much why I told him to do it when he called me into his dressing room before the show and said, “I’m thinking of doing this thing: Uma, Oprah…” I told him, “That’s you. If you’re going to be you on this show, do what you do.” Did it work with the Oscar crowd? Obviously not.

Did you get emotional after your last Oscars last year?
Mostly, it was a relief that I’d made a clean getaway. Because two years before, in the first of the three shows that Don Mischer directed, there was a mistake on my part that stayed with me for six months. Drove me crazy.

It was with Hugh Jackman and Nicole Kidman. Nicole had not come to rehearsal, but Hugh had. Don wanted the two of them to stay at the stage-right microphone, and even announce the winner over there. I think it was the only award in the whole show where they announced it from the side of the stage, not the center. And the reason for it was that they were presenting best score, and Don had planned a big huge camera move to the orchestra downstage.

I rehearsed it with Hugh, and then I told them in the wings, “Stay on the side microphone until I come out and tell you to move.” But I didn’t go out to remind them of that, as I often would, because I had Jennifer Hudson in the wings, and she was diligently going over her lines. I stayed with her, because I thought Hugh and Nicole would be OK out there. The next thing I hear in my headset is Don saying, “Who the hell’s in my shot?” I look up at the monitor, and here’s that gorgeous camera move to the orchestra, and Hugh Jackman and Nicole Kidman are silhouetted heading for center stage.

It was a rare mistake on my part, and it fucked up this beautiful sequence of shots by my mentor, the great Don Mischer. And it stayed with me. At the end of the night, everybody was drinking champagne downstairs, and I’m miserable.

And there was a bigger sense that to do the job the way I want to do it, you’ve got to be on your game. You’ve got to be able to juggle 10 balls, and I was getting to the point where I could only juggle eight. I never wanted to be the guy who they were thinking, when is he going to quit? I wanted to be the guy where they’d say, “Gee, we miss Dency.”

I get the sense that the stars who’ve done the show before may miss a few people this year. You won’t be there — but also, Danette Herman, who oversaw talent relations for more than 30 years, wasn’t asked back, and neither was Rita Cosette, one of the main stage managers who ferried stars where they needed to go. The whole movie-star chain of custody has been broken.
Look, is anybody going to boycott the Oscars because Danette’s not there? No. Are they going to be saying, “Where’s Danette?” I’m sure they will. “Where’s Rita?” Yeah. And maybe even, “Where’s that guy in the wings with the funny name? He ain’t here, either.”