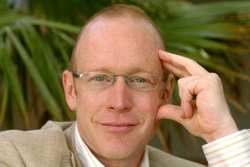 The suit accused Goetz of breach of contract, misappropriation of trade secrets and intentional interference with contractual relations, among other alleged offenses.

An emergency injunction barring Goetz (above) from using any data he retained while an OTX employee for the duration of the litigation also was granted on Tuesday, Vincent Bruzzese, Goetz’s successor, told TheWrap.

Representatives for Goetz, however, claim that no injunction or restraining order was granted and that discussions over the data in question are ongoing. Because the court order was administered verbally by Chalfan in the courtroom, a typed version of the order did not exist at the time this article went to print. 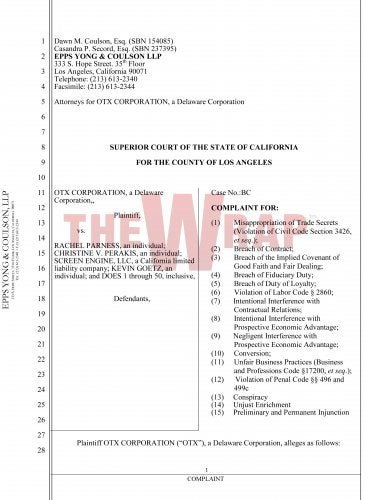 "The judge’s decision yesterday confirms that Screen Engine LLC is free to continue its business without any interruption or change in its operations," Screen Engine’s counsel Gary W. Nevers said in a statement.

Goetz, who left OTX without warning in February, had been there for seven years.

(On Thursday, lawyers for Goetz told TheWrap that they had filed an opposition to OTX’s complaint. They contest OTX’s arguments that Goetz’s efforts to solicit employees and clients of OTX for his new company Screen Engine are in violation of noncompete laws, because they claim such rules violate California public policy.

(They also admit that Goetz’s assistant inadvertently downloaded OTX information while transferring personal financial information from a work computer, but state that he had returned those files to the company immediately upon discovering the mistake.)

Relations between Goetz and his former company went south after French company Ipsos acquired the 200-person market research firm in January for an undisclosed sum. Following the sale, Goetz approached senior executives at OTX with a proposal to run their screenings as an independent contractor believing his payout from the sale did not reflect his true value to the company, according to individuals with knowledge of the talks.

Representatives for Goetz would not confirm negotiations took place and would only say that they could not reach an agreement that was acceptable to both sides.

By resorting to a legal challenge, OTX may have muddied the waters for Goetz at a critical time for his young business. The $60 million in revenue that OTX recorded last year shows this is a fight to guard potentially tens of millions of dollars in business.

Goetz’s reputation for providing critically important screening data could represent a threat to OTX, which, as the 116-page complaint makes clear, was blindsided by his abrupt departure.

Part of the reason OTX may have moved so aggressively to stifle Goetz’s company is that he had become the face of OTX’s screening business, cultivating longstanding relationships with Hollywood’s top studios.

Goetz’s decision to branch out on his own has put studios in a quandary.

On one hand, they enjoy close ties with Goetz and trust his expertise, but they are also facing intense pressure from OTX to retain their business, according to one studio executive. The threat that Goetz poses to OTX’s livelihood is real, as money from screenings comprise the bulk of their business.

"We use OTX for our screenings because of Kevin … he’s really good at it," an executive who has used Goetz in the past told TheWrap.

Goetz’s personal attorney, Christine Perakis, and Rachel Parness, who left OTX along with Goetz, also are named in the complaint. Parness previously headed the screening and qualitative division of OTX’s motion picture group.

"We’re all about the free market," Bruzzese said. "When someone intentionally misappropriates information and property, it’s not fair competition. We intend to show in trial that Goetz and Parness used confidential information in a way that harms our business."

Bruzzese said the emergency injunction prevents Goetz’s firm from using "normatives" — an accumulation of scores from thousands of test screenings built up over a period of many years — that he allegedly took from OTX.

By limiting his access to "normatives," OTX is trying to cut Goetz off at the knees, impacting his ability to move in  the very market sector in which he made his name.

"Without this data, he will be starting at exactly the point he is at — as part of a nascent company," Bruzzese said. "Your research means nothing if you can’t put it in context. One way is to compare to all the results we gathered for a dedicated and diverse base of clients from the script stage all the way through the screenings."

OTX’s legal play is certainly a bold one, but some studio executives questioned whether any of the "normative" data actually belongs to OTX. Rather, they claimed that responses to past films belong to the studios that hire OTX to run their screenings, not the market research firm.

What this means is that should Goetz be employed by a studio to run screenings for an upcoming film, he could access any data related to older movies in the studio’s catalogue to use as a rubric.

Also, because a person of Goetz’s experience would be well-versed in how a particular film or genre should score and would have little use of normative data, some studio executives could argue that OTX’s legal actions are more an aggressive business tactic than the logical recourse of an aggrieved party.

The proprietary complaints aren’t the only charges OTX is lobbing at Goetz.

The market research company also alleges that Goetz left to start his new firm abruptly and without warning, turning in his company card and leaving without discussing his resignation with OTX’s management on a day when several executives were out of town, including CEO Shelley Zalis and CFO Jeffrey Dean.

The complaint charges that his resignation "was designed to maximize the disruption and chaos to OTX’s business and internal operations."

Further, lawyers for OTX claim they can prove that Goetz attempted to poach employees in a violation of various noncompete agreements.

"There is overwhelming evidence that he used confidential information to hurt us on both the client and employee side of the business," Bruzzese said. " We are protecting the data that we have spent our blood, sweat and tears to build up. Without it we would not have become the gold standard in this industry."

Known for being gregarious and approachable, Goetz helped head up not just the studio’s screening operations, but also new projects that were geared toward surveying both laid-off movie critics and fanboys.

Yet his surprise exit stirred up bad blood with OTX. In addition to protecting its turf, OTX believes that Goetz left the company in the lurch, giving it no time to craft a succession plan, according to one studio marketing executive.

Should Goetz emerge from the legal battle unscathed, he will still face real challenges breaking into an industry that some studio marketing executives describe as oversaturated.

In addition to OTX, NRG and MarketCast have the movie research industry pretty well carved up. Would-be challengers face high barriers to entry and require easy access to capital, something that could dry up should Goetz become ensnared in a protracted legal fight.