What do you call a TV series that’s part family drama, part Western and part supernatural mystery, with a film noir aesthetic and a David “Lynchian” style? Well, other than not boring, you’d call it “Outer Range,” a new Prime Video show brought to you by the crazy creative mind of Brian Watkins, who serves as creator and executive producer. To articulate its premise, Watkins told TheWrap, “What happens when a disenchanted world stumbles upon enchantment?” He adds, “The sci-fi in the show is not extraterrestrial — it’s terrestrial.”

Starring Josh Brolin, Lili Taylor, Imogen Poots and a litany of other perfectly cast actors, “Outer Range” centers on Royal Abbott (Brolin), a rancher fighting for his land and family, who discovers an inexplicable mystery at the edge of his Wyoming property – a giant, presumably bottomless hole. Is it heaven? Is it hell? Is it limbo? Is it the past? Is it the future? Is it another world? Watkins’ answer: “Yes to everything you just said.”

Watkins hooks viewers in from its very first scene. Without giving anything away (you gotta see it for yourself), it’s mysterious, dark in both tone and look, with the music and voiceover immediately selling that whatever this character on screen was doing at that moment, it was not going to end well for them. 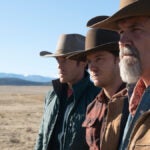 “Absolutely. It is, at its heart, a Western myth about real people grappling with the unknown,” Watkins said. “There’s a fable element to it that I think should evoke some sort of the same kinds of feelings you have when you’re sitting around a campfire in the West. I always tell people the West is the kind of place where you can walk up to the edge of a tree line and feel like you’re staring into another world — it’s filled with equal parts wonder and danger.”

From that idea came the story of a Wyoming rancher who stumbles upon this metaphysical void on his property and it sets in motion this chain of catastrophic events, “and it invariably ends up revealing the voids within him and within his family,” Watkins said. “I think at the end of the day, ‘Outer Range’ really is asking the question of what do we do when the unknown comes and meets us in our very own backyards or at our kitchen tables.”

TheWrap: “Outer Range” is a very layered, very complicated mystery that gets into your head, What was your pitch like? I mean, how did you describe it to the folks at Prime Video that made them go, “Yeah, we gotta have this”?

Brian Watkins: Funny enough, I knew it was something I couldn’t pitch out, so I wrote the very first episode on spec. And I took that to Amazon and that’s what they fell for. And they said, “Oh my God, where does it go? Can we start a mini-room right away?” And that’s what we did, actually. So, it was a very exciting organic process. But, you know, pitching an idea for a rancher that stumbles upon a metaphysical void isn’t exactly– (laughs) you know, it draws more question marks than anything. But I’m so pleased and happy that they took such a big swing and really leaned into the originality of that and really supported the original take of that.

When you wrote that first script, did you know where it was gonna go by the end of Episode 8? Or as you were writing or even during production did it evolve in a way that you hadn’t planned?

I did know where I was gonna go. I think we had some clear guideposts to get to an ending that we were really excited about. And as we broke story in the writer’s room, of course, it kind of evolves through not just the writer’s room, but then we had this pause from COVID and it evolves then, and then you have during the production making of it, it evolves then in tiny ways. But I think we always kept the same ending point. But the very first thing I wrote on the board in the writer’s room from the very first day was this phrase that sort of carried us through all of that: Uphold the Wonder. And I think that was sort of a North Star for how to kind of ground ourselves in this, and to always be sort of leaning forward into that wonder, always looking at how these people are feeling and grappling with it. 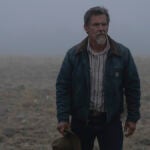 it has moments of feeling very David Lynch-like, and I mean that in the best possible way. It feels as if it’s filled with symbolism, especially with the stuffed owls at the Tillerson household.

Without giving too much away, yeah, I’ll say, you know, the symbolism does serve as a sort of set of emotional Easter eggs. I’d say you want to look to the arcs of our characters. You can find in their symbols some sort of their path. But I love that you bring up the owls. To me– the instructions to my production designer for that piece was that we’re looking to express a wall of murdered wisdom.

That, to me, is what the Tillerson family kind of represents. I hope it comes through, and those are all over the place. I think there’s other elements of symbols, be it the crochet sign in Celia’s office that says, “Lord reveal yourself to us,” or even the placement of cold beer in the first episode. These are graphic symbols that are sort of like mini-sermons to us, and they exist out West in numerous ways as telltale signs towards what we’re doing here. There’s a famous billboard in the show that we created that was sort of born of the philosophy that had a lot to do with the genesis of the show. And so when you see that billboard in Episode 7, I hope it unlocks a sort of new way of thinking about the events that have happened. I don’t wanna give too much away there because it is Episode 7, but when you see that billboard, that’s very much our hope.

And I think another place of intrigue is Billy Tillerson, who is this character that is a bit of a wild, unpredictable, yet kind and soft-spoken person, and he’s constantly singing in our show. There’s several places where, if you listen carefully or if you examine what he’s singing or talking about and if you really get into the lyrics, you might find some shape of the story or some shape of what a character’s about to do or is grappling with.

And then there’s that buffalo that keeps appearing, who feels important to the overall story.

Without saying too much, I think you should absolutely keep an eye on the Buffalo.

OK, that’s fair enough. Autumn seems harmless enough. When she shows up at the ranch, she seems like a pleasant enough person… and then we learn she’s not.

I think she really epitomizes that woman of the West that helps, that wants to live on the edge. And I think as such, she’ll hold your hand while she tries to jump off the cliff. And I think that’s what is really exciting about her is that she’s so UN-unpredictable — one day she’ll be bringing you a weed brownie and the next day she’ll be wanting to start a forest fire (laugh). I grew up around a lot of Autumns and I think that energy is just addictive and it’s really completely curious and compelling.

And then there’s that hole in the ground. It’s the crop circle that ran amuck.

There’s an aspect to it that goes back to the mysteries of the show. In order for the inner voice within Royal to be expressed, I think he needed to find an external voice. And so, um, I think it’s invariably linked to the character and, in that way, it’s really about how the West shapes us. The West, I feel, is a place where exteriors shape interiors, where the land is a force that we invariably get changed by. And so, to me, that’s where the exterior has really shaped and informed the interior of Royal.

Did you envision “Outer Range” as an ongoing series, an anthology, a limited series?

I think I envisioned it as a series that could sort of plum the depths of Western mythology, no matter what form it took. By that, I mean, I think there’s all sorts of narrative strands in the West that are so relevant to our day. You know, there’s a line in the second episode from Wayne Tillerson where he says “one frontier, begets another.” I think there’s a real sort of territorial yet transient nature to the exploration of the West, which is to say that it’s always re-exploring itself and redefining itself. That’s why we talk about the show as a bit of a neo-Western. So whether it’s through mysteries in the earth or a more metaphysical mystery or be them some spiritual strain that the West has tapped into before, I think it’s just rife with story. That’s where, for me, it was always just a thrill to reach into those places, where the West has not been explored in a long time. It’s where I grew up. So that’s sort of where the show came from as well.

Brian, why should our readers watch “Outer Range”? I mean, besides it being really good. (laughs)

Knowing how the world works, that is really affecting all of us. I think the last few years have completely upended our notions of ourselves, of our world. I think it really is a story that is tapping into the root of those angsty feelings about the unknown. How do we deal with this? What do you do when something is unknown or unknowable or inexplicable? I think it comes back to that question of what would happen if the disenchanted world stumbled upon enchantment. I really think that’s the crux of the question that we’re trying to ask. And so I hope that’s the question that audiences ask as they watch it.

“Outer Ranch” can currently be seen on Prime Video.

(This interview has been edited for length and clarity.)