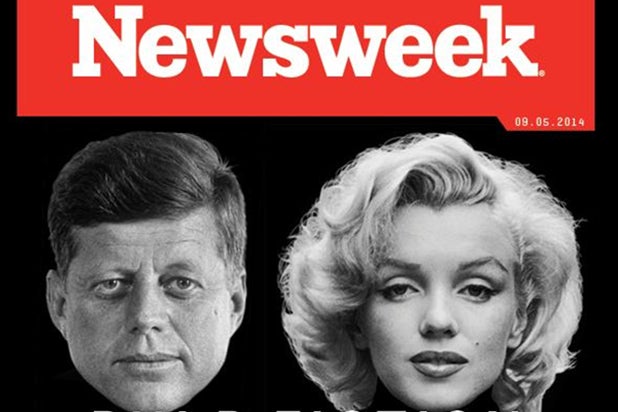 C. David Heymann’s posthumously released account Marilyn Monroe and Joe DiMaggio’s torrid marriage was favorably reviewed after its July release, but Newsweek’s David Cay Johnston is now contesting the authenticity of the book and much of the author’s entire biographical catalog.

“I had exposed his first celebrity bio as a fraud on the front page of the Los Angeles Times back in 1983, and I knew his methods hadn’t changed over the years,” he added.

Newsweek’s critical examination does more than just cast a shadow doubt on Heymann’s juiciest discoveries, it flatly refutes them. Johnston argues “Joe and Marilyn,” for example, published earlier this Summer (nearly two years after the author’s death), might be partly based off of fabricated interviews.

“In ‘Joe and Marilyn,’ Heymann drew heavily on the rich trove of books about the Yankee Clipper and the iconic blonde,” wrote Johnston. “He also cited interviews with writer George Plimpton; Pierre Salinger, the Kennedy White House press secretary; and [Jack] Newfield. All three men were dead by 2005.”

“Plimpton, in a tape recording in Heymann’s own archive, declined to be interviewed. Salinger, in a letter also in the Heymann archive, said Heymann wrote ‘dramatic lies’ and refused to cooperate. We already know that Newfield wrote a column in the Post denouncing Heymann. Despite this, Heymann ‘quoted’ all three men in his book,” continued Johnston, “Long after they had been buried.”

Also read: Newsweek Bitcoin Writer Slams Tina Brown: ‘I Have A Problem’ With Her Comments

Johnston critiqued Heymann’s previous “salacious and gossipy” biographies, too,  including “Poor Little Rich Girl: The Life and Legend of Barbara Hutton” (1983), “A Woman Named Jackie” (1989), “Liz: An Intimate Biography of Elizabeth Taylor (1995)” (1995), “RFK: A Candid Biography of Robert F. Kennedy” (1998) and “Bobby and Jackie: A Love Story” (2009). Johnston claimed each is “riddled with errors, exaggerations and shameless fabrications.”

In the Elizabeth Taylor biography, for example, Heymann claims to have interviewed Taylor and uncovered a tryst with Frank Sinatra and a rich history of pill-popping. However, Johnston said the actress’ lawyer filed a suit after its publication, which tried to prevent it from being adapted into an NBC miniseries. In it, Taylor’s lawyer claims she never even “spoken to Heymann or anyone working for him.” Johnstson said a judge denied her request.

Johnston also slams Heymann for “Bobby and Jackie: A Love Story.” In it Heymann claims Robert F. Kennedy carried out an affair with his widowed sister-in-law Jacqueline Kennedy Onassis soon after the death of President John F. Kennedy. The book even suggests RFK may have had a romantic affair with Rudolf Nureyev,  a male Russian ballet dancer.

In “Joe and Marilyn,” the long-rumored affair between President John F. Kennedy and Monroe tales am absurd turn when Marilyn Monroe supposedly calls the White House and “actually told the First Lady she wanted to marry the president.”  Heymann cites that juicy morsel to the late actor and masseur Ralph Roberts but years earlier, in 1989’s “A Woman Named Jackie,” Heymann attributed the story to Peter Lawford.

More inconsistent melodrama surrounds Marilyn Monroe’s final moments when he claims the troubled icon pulled a knife and lunged at Robert Kennedy who was visiting her Brentwood house with Lawford. In “Joe and Marilyn,” however, Heymann said that “at one point Monroe pulled a knife and lunged at Kennedy, and that the two men wrested the weapon from her,”  Johntson wrote. “When he later told the tale in ‘Joe and Marilyn,’ Heymann wrote that Monroe tossed a glass of champagne in Kennedy’s face.”

Heymann explained in the back of the book how the knife became champagne. “In an interview with the author, Peter Lawford originally claimed that Marilyn threatened RFK with a kitchen knife; he then revised the anecdote to indicate instead that she threw a glass of champagne at him.” Lawford, however, died on Christmas Eve 1984, Johnston explains, before the books were published which would mean Lawford  changed his story before the first book was  published.

Johnston is particularly galled by by Heymann’s CBS-owned publishers, Simon & Schuster, which continues to print these allegedly fraudulent biographies. “Why does CBS continue to sell his books,” he asks. “Most publishers rely on their authors to be truthful, and diligent in their research, and most nonfiction books are not fact-checked by publishers.”

“But when a red flag is raised, publishers have an obligation to their readers to investigate. And when a sea of red flags floods their lobby, they need to start pulping the fiction.”