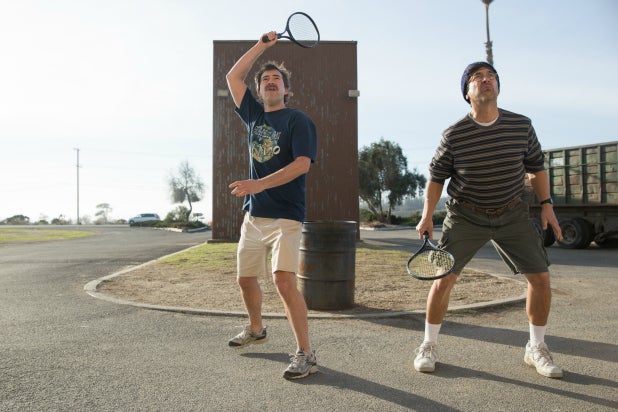 An unwieldy hybrid of “Step Brothers” and “50/50,” Alex Lehmann’s “Paddleton” offers a funny, surprisingly tender portrait of two arrested-development adult men coming to terms with a terminal illness. Ray Romano continues to offer new dimensions to the dumpy everyman characters he could at this point play in his sleep opposite Mark Duplass’ do-nothing cancer patient, while director and co-writer Lehmann (“Blue Jay”) mines a familiar kind of male bond for an understated, unexpectedly powerful payoff.

Duplass plays Michael, a copy-shop clerk with one friend, his upstairs neighbor Andy (Romano). Notwithstanding their separate apartments, the duo spends virtually every free minute together, mostly rewatching the same kung fu movie while eating frozen pizza, but occasionally venturing outside to play an invented sport called “paddleton” which involves hitting a racquetball off of the screen of an abandoned drive-in movie theater into a barrel.

After Michael’s cancer diagnosis proves inoperable, he decides to commit medically-assisted suicide and asks Andy to join him on the six-hour drive to the nearest pharmacy that will fill his prescription. But after the two of them acquire the pharmaceutical cocktail Michael needs in order to escape his increasing pain, Andy becomes less sure that he wants to watch his best friend kill himself and not-so-slyly begins a campaign to keep him from the medication he needs.

As familiar as the concept may be of watching two awkward, maybe-not-so-smart adult men navigate a gently dysfunctional friendship, Lehmann, working from a script co-written by Duplass, manages to elevate what could have been an improvisational exercise or sophomoric retread into something delicate and substantial without leaning too heavily on the natural melodrama of his premise.

Michael and Andy are two lonely, average men without any real professional or social prospects, and the protective routine of their friendship rings with real human authenticity, especially after Andy begins to realize that he’s on the verge of losing the only person with whom he feels he can freely communicate. Michael, an admitted failure as a spouse and sibling, seems to embrace the occasionally puerile but mostly earnest interactions he shares with Andy, enjoying their simplicity together, their shared interests, and their unvarnished honesty — even when Andy is embellishing, or clearly lying.

Romano has played a number of versions of this role in the past, but as the comedian edges further away from his sitcom days, he seems to find different ways to bring a guy like Andy to life. Here, he’s less affable but more realistic; a guy who hates small talk and daydreams about the inspirational halftime speech he intends to sell one day to some unlucky coach, he finds a soulmate in Michael via their mutual surrender to the challenges of more serious relationships or the outside world as a whole. Romano lets Andy be obnoxious, but the actor tenders those abrasive edges with an almost childlike commitment to his friend that manifests itself as often as true compassion as it does petulance or selfishness.

Duplass, meanwhile, seems to enjoy purely the rapport between Michael and Andy. Michael has clearly had a few more adult experiences than Andy, but Duplass never plays him as condescending or superior, instead just in a sort of constant admiration for his friend, even when he’s behaving like, well, a little kid. As co-screenwriter, he gives Romano’s character the more interesting journey, but as an actor it’s his character’s consistency — his appreciation and acceptance of Andy’s shortcomings — that facilitates his BFF’s incremental growth.

Simultaneously, a small coterie of supporting performances, including Dendrie Taylor (“Saving Mr. Banks”) as a bohemian hotel clerk and Kadeem Hardison (“Black Monday”) as an empathetic pharmacist, subtly test Andy’s insular worldview and provide the duo with opportunities to showcase their sometimes-discordant chemistry.

Lehmann doesn’t offer much of a take on assisted suicide except for “if you’re going to commit suicide, make sure someone who truly cares assists you,” and it’s his subtle observations about the way the two characters know and understand one another that makes their final moments feel almost shockingly powerful. But as a snapshot of two guys with enough self-awareness to joke about being “weirdos,” or a vignette about that quiet neighbor (or couple) in your apartment complex who comes and goes without making an impression, “Paddleton” is quietly funny and full of compassion — the kind of movie that, much like its characters, feels likely to get overlooked or ignored but proves surprisingly rewarding once you make the effort to look past its surface.