The Gala that launched the Palm Springs International Film Festival on Tuesday night was many different things: an awards season kickoff, a charity event, a time in the spotlight for some deserving film artists …

… and, of course, a Mariah moment.

TheWrap’s Mikey Glazer has the report on Carey’s disjointed, rambling speech, and video of the whole mess. Suffice it to say that if Palm Springs was a helpful way for awards hopefuls to give their acceptance speeches an out-of-town tryout, the Mariah thank-yous need some serious retooling before they’re ready for the big time.

On the other hand, Carey is one of the least-likely Palm Springs honorees to be faced with making an Oscar acceptance, so maybe her giggly, entertaining train wreck of a speech won’t really matter in the long run. 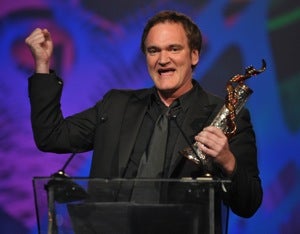 As for the rest of the gala, here are some of the things it was:
This time, there was almost as much star power in the cavernous room, though it was spread out. Before the dinner ceremony began, stars, Hollywood types who’d come east for the event, and lots of local bigwigs walked the red carpet past the friendliest security you’ll ever find at an awards show, and then mingled at the dozens of tables: Jason Reitman chatted with fellow Canadian director Norman Jewison, who’d present him with the Director of the Year award, while a few feet away “Up in the Air” star Kendrick huddled with “Nine” director Rob Marshall.

Besides Carey, the most entertaining speech of the evening probably belonged to surprise guest Sean Penn, who began an adroit and eloquent introduction of T Bone Burnett (who won the Frederick Loewe Award for Film Composing) by quoting, without explanation, a couple of verses from “Humans on Earth,” an old Burnett song that virtually nobody in the room knew.

Burnett, in a gracious acceptance speech, commented on his three gigs working with Jeff Bridges over 30 years (“Heaven’s Gate,” “The Big Lebowski” and “Crazy Heart”) by saying that all you really needed to hang out with Bridges is a guitar and an occasional spliff – which led, a few minutes later, to a cringe-worthy moment in which Mary Hart said that she thought she was hip after 20 years on “E.T.,” and she was pretty up on her musical instruments – “but what is a spliff?”

(During the next break, somebody told her that it was a marijuana cigarette, not a musical instrument.)

Over the course of the evening, Jeff Bridges called his “Crazy Heart” director Scott Cooper “one of the best directors I’ve ever worked with”; a dazed Cotillard delivered most of her speech not to the audience but to her “Nine” director Marshall, who was standing onstage with her; and Clint Eastwood and Morgan Freeman were predictably terse.

Considerably more talkative was Diablo Cody, who explained why she read from notes rather than trusting the TelePrompTer: “I always think somebody’s gonna sabotage it, and I’ll be up here saying, ‘Go f— yourself, Palm Springs.’”

Cody then gave Quentin Tarantino the Sonny Bono Visionary Award. Tarantino said he thought it looked like a bong. This did not draw a comment from Mary Hart. 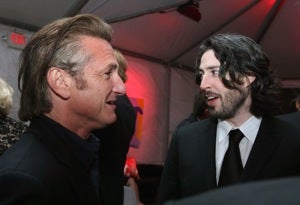 Half an hour later, at the end of the night, Hart showed off her newfound knowledge: “I think it’s about time to either dance, or go find a spliff!” she said happily.

Whereupon many of the crowd adjourned to the after-party at a local hotel, where first-time director Scott Cooper tried to make sense of awards season, and talked about how stunned he was by Jeff Bridges’ flattering remarks.

Sean Penn, meanwhile, hung out in a corner of the party, chatted with Burnett and Reitman and Renner, and told me that “The Hurt Locker” was unquestionably “the most significant movie of the year, and probably the most significant in many years,” and that Renner was “the guy who’s got me running.”

(More on this conversation later.)

And while Mariah Carey was long gone (she didn’t even stick around for the end of the show, much less the after-party), there’s no question who was the talk of the party.