The new series, which is set to stream on Peacock starting Nov. 11, follows Paris as she prepares for her marriage to venture capitalist Carter Reum. (We’re honestly just thrilled she isn’t still dating that guy she kicked out of the DJ tent in the YouTube documentary.)

The trailer is pretty much everything you would want and expect from “Paris in Love” – Paris flashes her rings to her friends, there’s a Kris Jenner cameo, an explicit reference to a “Simple Life” moment and lots of appearances by Paris’ tiny dogs. Also, in what is undoubtedly the most endearing moment, Paris and her beau go through the McDonald’s drive-through. 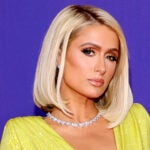 Celebrities – they crave a late night McFlurry just like us!

According to the official release, fans can expect an intimate look at “her engagement party in New York, to bridal dress shopping, hunting for the perfect venues for the three-day celebration, the joint bachelor-bachelorette party in Las Vegas and the bridal shower hosted by Kathy Hilton.” One of the very best moments involves mom Kathy, who while looking at the stationary Paris has picked out, says that it looks more like the “invitation to a dog’s birthday party.” Yes please.