Paramount Pictures spared no expense when it threw a lavish party earlier this month that took over the famed Griffith Observatory. 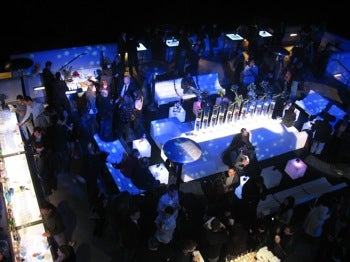 An enormous projection of the Starship Enterprise glided across the front of the building. Special “Star Trek”-themed drinks were served by staffers clad in Starfleet uniforms, and actors from both from the original TV series and from director J.J. Abrams’ celebrated franchise reboot cruised the room.

When told of the lavish bash, an Oscar campaigner for a rival studio had two responses:

The first: “I think it’s completely off the deep end.”
The second: “If I had their money, I’d be pouring it into my movies, too.”

This season, few studios have the money.

Gala premieres are still taking place, as are frequent cocktail receptions for the Hollywood Foreign Press Association. (With fewer than 100 members, the group that hands out the Golden Globes is still a cost-effective organization to lobby, and one known to appreciate face time with the stars.)

But when it comes to Oscar, the landscape has changed. In place of $10-$15 million campaigns featuring splashy soirees, now it’s mostly trade 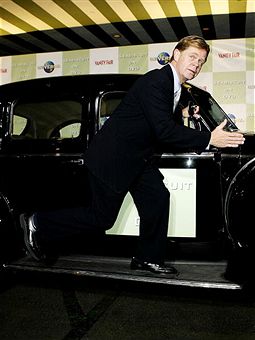 advertisements, online ads and the aggressive booking of guild screenings followed by Q&A sessions with the filmmakers.

Parties, particularly the lavish ones that require a $20,000 party planner and a budget that spirals upward into six figures, no longer clog the calendar the way they did in the days of “Gladiator” and “Seabiscuit,” which launched its campaign with a lavish Polo Lounge soiree — also tied to the DVD release. (At left, the film’s William H. Macy poses with a classic car brought in for the occasion.

The “Seabiscuit” gambit worked, boosting the summer release’s profile and helping it land a surprise Best Picture nomination. But with a slumping economy and real questions about whether you can reach enough voters to warrant the cost, activity on the party circuit has been slashed to a fraction of what it once was.

“The days of taking over restaurants are gone, at least for the studios I work for,” says one consultant who has done plenty of parties in the past — and who, like everyone else contacted for this story, didn’t want to be identified talking strategy.

So far this season, the highest-profile Oscar-related party was clearly the Academy’s own Governors Awards dinner. And, on the studio side, a few companies threw shindigs to coincide with the AFI Fest, but most of them simply used the festival’s own facilities in the Hollywood Roosevelt hotel across the street to host their the screenings. 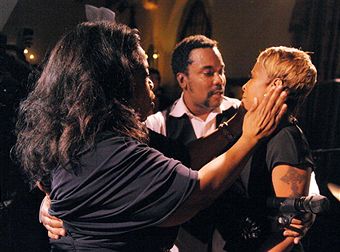 Lionsgate, though, followed the AFI Gala for the highly touted “Precious: Based on the Novel ‘Push’ by Sapphire” with its own bash at the Chateau Marmont hotel, where Oprah Winfrey appeared and Mary J. Blige (below, with Winfrey and director Lee Daniels) sang “I Can See in Color,” her best-song contender from the film. The company clearly didn’t choose the Chateau by accident — in early 2006, that hotel was the site of Lionsgate’s delirious Oscar-night party for “Crash,” a celebratory affair after that film scored an upset and was named Best Picture.
(Incidentally, the phrase “Oscar parties” has technically been a misnomer for years. In 2003, the Academy instituted new guidelines that strictly limited parties aimed at Oscar voters to gatherings of actual friends, and asked studios not to pay for entertainment or refreshments. Since then, studios have aimed their soirees at the Hollywood guilds that may contain AMPAS members, rather than directly at the voters.)
An imaginative take on the new frugality is an upcoming DVD release event for “Inglourious Basterds.” The Weinstein Company is always one of the most active Oscar-season players, but in this case it opted not for a lavish formal party, but for a loose, funky event more in keeping with the spirit of director Quentin Tarantino’s freewheeling movie.
Instead of renting a high-profile, high-priced venue, TWC and Universal Home Video will take over the New Beverly Cinema, a modest revival house in which Tarantino is an investor and occasional programmer. Actress Melanie Laurent, who plays a theater owner and projectionist in the film, will show off the skills she learned at the New Beverly by running the projector for a “Basterds” screening.
The total cost will be modest compared to a typical, more glamorous party — but the fun, unconventional tone of the event will attract certainly attraction attention, and by doing so simultaneously promote the home video release and bump up the profile of “Basterds” just before Oscar nominating ballots hit the mail.
And then Weinstein, along with most other studios and indies in town, will go back to taking out ads, scheduling screenings and Q&A sessions, and wining and dining a select few rather than entertaining the masses.
“I can still convince myself that those little receptions for the Golden Globes are worth doing,” says a campaigner. “But the bigger parties — these days, I just don’t see how you can justify the expense.”
x
Looks like you're enjoying reading