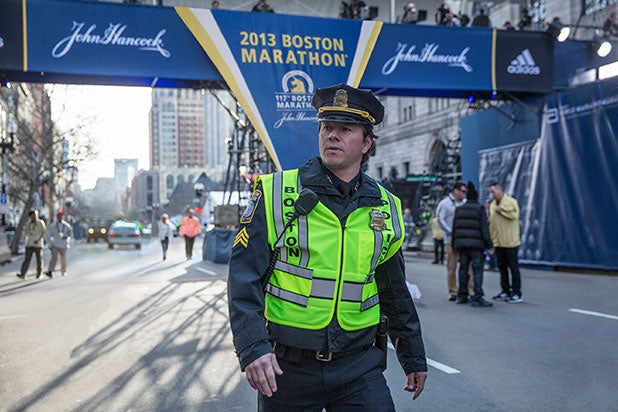 If you saw “Manchester by the Sea” and think people from Massachusetts don’t know how to express their feelings, you should probably read this review of “Patriots Day.”

Boston critic Sean Burns really doesn’t like the new Mark Wahlberg Boston Marathon bombing film, and delivers a master class in negativity as he lays out the reasons why. He finds the movie “revolting,” and “as disgraceful an exploitation of real-life tragedy as I’ve ever seen.” He stops just short of likening it to “a North Korean propaganda film,” and adds, for good measure, “Everyone involved in this movie should be ashamed of themselves.”

Burns wrote the review for NorthShoreMovies.net, based in the region northeast of Boston that includes the titular town of “Manchester By the Sea.” His local take differs pretty strongly from those of most critics on Rotten Tomatoes, where the Peter Berg-directed film has an 80 percent rating.

We won’t take you through the skillful, slow-burn opening of Burns’ review — which praises the hero played by Wahlberg before delivering a gut-punch surprise twist. But here are a few of the most wincing passages that follow:

“Unfortunately, our obsequious local media lacks the nerve to ask Wahlberg and Berg why they invented a fake person to take credit for everything that was accomplished by the folks they’re allegedly honoring.”

“The few of us who saw Berg and Wahlberg’s $150 million money-loser ‘Deepwater Horizon’ back in October know their formula already: the former-underwear-model-turned-hamburger-salesman plays a flawless-yet-humble salt-of-the-Earth fella who runs around a factually dubious depiction of a tragic event, super-heroically saving the lives of the supporting cast so they can all spend the last ten minutes of the movie thanking him in slow-motion while sad music plays. The narcissism is grotesque.”

Also Read: 'Patriots Day' Actor Says It's Not Too Soon for a Movie About Boston Marathon Bombing (Video)

“A few years ago Wahlberg famously claimed he could have stopped 9/11 if only he had been on one of the planes. These fantasies of inserting himself into national tragedies are something he really should be discussing with a therapist.”

“The movie spends so much time fellating its bogus hero, were it about an actual living person ‘Patriots Day’ would feel like a North Korean propaganda film.”

“It’s professionally made, slickly heartfelt, and is offered up as an act of civic healing. At best, it’s unnecessary. At worst, it’s vaguely insulting,” Burr wrote.

Also Read: 'Assassin's Creed' Reviews Are as Bad as You Probably Expected

To fans who found his take a little harsh, well.

“Lest you think I went too hard on @patriotsdayfilm,” Burr tweeted Wednesday, linking to Burns’ review, “Ladies and gentlemen, the great @SeanMBurns.”