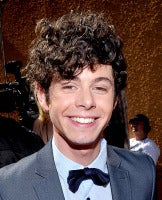 MTV’s new series "The Hard Times of RJ Berger" premiered Sunday night. The show stars Paul Iacono as a socially awkward, but incredibly well-endowed high school nerd. TheWrap caught up with  Iacono on the night of his big debut at the afterparty for the 2010 MTV Movie Awards.

Iacono is just 21 years old, but the graduate of New York City’s famed Professional Performing Arts School has already made a name for himself in the Manhattan theater scene. He’s had roles in several stage shows including the Signature Theater Company’s 2006 revival of "Landscape of the Body" and the 1999 Paper Mill Playhouse production of "Mame" with Christine Ebersole.

"The Hard Times of RJ Berger" chronicles the experiences of the title character after his most private parts are accidentally exposed at a basketball game. Berger’s manhood is so massive, it causes one observer to exclaim, "It’s a god–mn Buick Regal."

Iacono described the show as, "a coming-of-age tale like ‘Wonder Years’ with the vernacular of ‘Superbad.’" Genital jokes are a big part of the show, but Iacono thinks there’s much more to "Hard Times."

"Penis jokes are just sort of a motif of the show like cops are for a cop show," he said.

With Sandra and ScarJo’s lesbian liplock, the "Twilight" awards binge and Tom Cruise’s costumed cameos, Iacono’s show was far from the center of attention on Sunday night. Still, the show’s star is confident "Hard Times" can hold its own. Asked what he expected to be the most talked-about topic on the morning after the Movie Awards, Iacono had no doubts at all. "100% my big wang," he said.