Paul Schrader’s next film “The Card Counter,” which stars Oscar Isaac in a revenge thriller, has been set for a theatrical release on Sept. 10, 2021.

Isaac stars in “The Card Counter” alongside Tiffany Haddish, Tye Sheridan and Willem Dafoe, and Focus Features is releasing the film this fall.

This is Schrader’s follow-up to his Oscar-nominated “First Reformed,” and it’s also the fifth collaboration between Schrader and Martin Scorsese, who is executive producing “The Card Counter,” following Schrader’s scripts for classics like “Taxi Driver,” “Raging Bull” and “Bringing Out the Dead.” 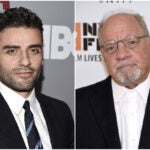 Isaac in the film plays Tell, a gambler whose spartan existence on the casino trail is shattered when he is approached by Cirk (Sheridan), a vulnerable and angry young man seeking help to execute his plan for revenge on a military colonel (Dafoe). Tell sees a chance at redemption through his relationship with Cirk. But keeping Cirk on the straight-and-narrow proves impossible, dragging Tell back into the darkness of his past.