“Pebbles” is an Indian Tamil-language drama that follows a young boy, Velu (played by Chella Pandi), who is dragged out of school by his abusive, alcoholic father (played by Karuththadaiyaan) to embark on a journey to bring back the wife who left his father. Originally titled “Koozhangal,” the film was especially personal for director P.S. Vinothraj.

On a panel moderated by TheWrap’s Steve Pond, Vinothraj recalled through translator and creative producer Amudhavan Karuppiah that the film is based on a call he had with his sister, who had her own experiences with domestic violence and walked with her child in the middle of the night after being thrown out by her abusive husband. According to Vinothraj, the film was shot in the same place his sister walked.

And to properly juxtapose the calmness of the the hot, arid landscape they endured while shooting the father and son’s chaotic relationship, Vinothraj asked the film crew not to wear shoes, as the footwear could interrupt the sounds he wanted to pull. 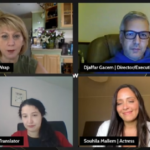 Producer Vignesh Shivan, who was also present at the panel, said that while they were shooting in the middle of summer, there were no birds or anything in the area, so they wanted to make sure the resounding silence of the terrain as well as the lonesome footsteps of the protagonist Velu were captured.

Vinothraj added that he didn’t want “Pebbles” to just be a story about his sister and soon realized that the core of the story is actually relevant to women and children around the entire world.

Shivan said that they weren’t thinking of the film’s commercial potential while they were making it. Instead, they wanted to make a film “from the heart” and one that “can give back to cinema” in the way that it has continuously given to them. 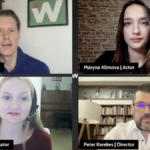 Karuppiah said that the authenticity in “Pebbles” first drew him to the project. “I’m also part of these regions, I’ve seen these people, and [they] have never been captured on screen. It has never been captured so raw, realistic and authentic ever on screen in Indian cinema as far as I know.”

“Pebbles” was selected as India’s entry for the Best International Feature Film at the 94th Academy Awards.

Watch the rest of Steve Pond’s interview with director P.S. Vinothraj, producer Vignesh Shivan and creative producer Amudhavan Karuppiah in the embed above.