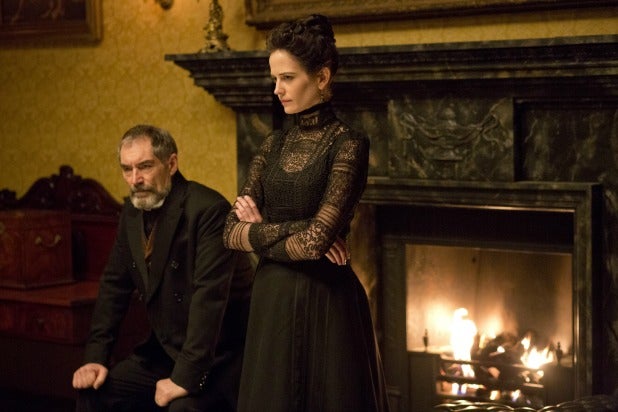 (Spoiler alert: Don’t read this if you haven’t yet seen Sunday’s “Penny Dreadful.”)

Sunday’s “Penny Dreadful” featured a scene in a garden maze that seems to be the source of much of the show’s madness.

In the version that aired, Sir Malcolm doesn’t realize Vanessa saw him — so he never realizes the hell her discovery unleashes. Vanessa, damaged by what she witnessed, grows up to have sex with Mina’s fiance. Mina believes her life is ruined, and in her despair falls under the control of a vampiric master. Vanessa, meanwhile, goes insane and possibly becomes possessed. Eventually she seeks out Sir Malcolm, and tells him they must work together to find Mina.

It all happens in flashbacks, which change the color of everything we’ve seen in the previous four episodes of the Showtime drama: It turns out the partnership between Vanessa and Sir Malcolm is much more fragile than we realized, and filled with tension.

The question is what kind of tension. Dalton helped us understand. At one point, we asked perhaps too pointed a question.

TheWrap: Do you think Sir Malcolm’s affair with Vanessa’s mother was the original sin that unleashed all this evil?

Dalton: It’s part of it. But part is the operative word. There’s more. Of course you’ve got to understand Vanessa’s part. She has an affair out of spite, out of revenge, out of jealousy. It is those actions that set Mina off.

It is my action that has sparked Vanessa’s action, coupled with her own jealousy and resentment and all the rest of it. It might be understandable psychologically, but it obviously is a terrible thing to do to anybody. And it deeply wounds my daughter. So we’re both responsible for that, aren’t we?

You’ve unsuspectingly led Vanessa into your world, and it adds depth to all the interactions we’ve seen so far.

He is also responsible for her actions against Mina, which is great sort of entanglement. Because people so often, always need to be blaming someone else for what they should be taking responsibility for. So now we’re getting into this whole thing about guilt and the responsibility for guilt and what is redemption? It’s fascinating.

Vanessa clearly has a sexual attraction to your character, and we don’t know if it’s reciprocated.

If that. So no. I mean, he likes her. Because he sees in her all the things he would like in a daughter.

Right, he’s clearly not attracted to her as a child. But when she’s older? Probably he still sees her like a daughter?

Maybe yes, maybe no. [Laughs.] We’ll just tease this one out.


[Possible spoiler alert: At this point we asked a question that may point toward a spoiler. You may want to stop reading.]

Is there any chance that Sir Malcolm is Vanessa’s father?

[Laughs. Laughs. Laughs more.] Oh my, oh my. I think the phone is going down immediately. I’m not answering that question. There will be a lot of answers – no, I don’t know if there will be a lot of answers. But there will be conclusions coming. I’ve been a bit absent from episodes three and four. But you’ve seen five and six, seven, eight we get onto the last lap. Malcolm’s story is much more present. I would just leave your excellent question as an excellent question.