When it comes to producers’ credits, the most newsworthy movie of the moment is definitely “Lee Daniels‘ The Butler,” which has drawn media attention for having more than 40 different credited producers.

“I wish that there weren’t so many producer credits on this picture, because it is a little embarrassing for everyone within our community,” said Producers Guild of America co-president Mark Gordon in an interview with TheWrap. “But I do understand that there’s very little that someone won’t do to get a movie made. And in the end, if you look at that movie and you appreciate what its message is, and you weigh what they had to do and what they ended up with, I get it.” 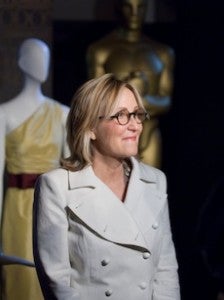 Most of the credited producers are in the executive-producer and associate-producer categories, with IMDb listing seven associate producers, six co-producers, 18 executive producers and four co-executive producers.  Only five – Daniels, Cassian Elwes, Buddy Patrick, Pam Williams and Laura Ziskin – receive the actual “Produced by” credit, and those five have yet to go through the vetting process that would result in the Producers Mark.

Also read: Inside Story of How the Producers Guild Convinced Studios to Let It Overhaul Movie Credits (Exclusive)

If the film is nominated for any awards, though, they will be.

“It will be arbitrated, and if it gets nominated we’ll announce who the real producers are,” said PGA co-president Hawk Koch.

And although Ziskin (right) died in 2011, before the film went into production, he added, she is in a good position with the guild: “This was Laura’s project.”

Also read: Did ‘Lee Daniels’ The Butler’ Just Kick Off the Oscar Race?

While “The Butler” is an extreme case, Gordon said the use of multiple producers of all kinds is becoming the norm. “The idea of 41 names in some producorial capacity is very sensationalistic,” he said. “It’s a great headline. But the reality is that making a picture now requires alliances, it requires partnerships, it requires people coming together to get movies made. And that’s even more true on the independent side.”

As an indie film that required a number of different backers to raise the money for its production, he added, “The Butler” is an aberration that nonetheless illustrates the current nature of filmmaking.

“I will bet you that at least 50 percent, if not more, of the people who are credited as some form of producer on that movie are deserving of their credits for making a contribution to a movie that was very, very difficult to get made,” he said.

“But I’m sure that there are more people who got a credit on that movie than should have any kind of credit,” he added. “I don’t know the circumstances – but look, how many producers does it take to screw in a light bulb? It ain’t 41.”