Sometimes it’s not a great idea for artists to speak to the press on the eve of an opening. Take LaTanya Richardson Jackson’s interview last week in the New York Times regarding her direction of the first Broadway revival of August Wilson’s “The Piano Lesson,” which opened Thursday at the Ethel Barrymore Theatre. On the topic of the Pulitzer Prize-winning play’s only lead female character, Richardson Jackson says, “Berniece is surrounded by all of this testosterone.” The director goes on to reveal that after seeing the first production of the play, at Yale in 1987, she asked the playwright, “Where are all the women? Where are all the parts for women?”

If Richardson Jackson saw the dearth of female characters as a problem, her direction turns it into a major flaw. From what transpires on stage in her “Piano Lesson,” Wilson wrote a play about a young widow and mother, Berniece, who is not only surrounded by testosterone but swept away by it — until the very last moment.

Berniece treasures the prized family heirloom of an exquisitely carved piano and wants to keep it where it belongs: in the family’s possession in her living room. In that quest, she is pitted against her roustabout brother, Boy Willie, who wants to sell the piano to buy some farm land. John David Washington plays the fast strutting and logorrheic Boy Willie, and it is unlikely that any other actor – male, female or nonbinary on Broadway right now — would be able to hold his, her or their own against what Washington unleashes on the Barrymore stage in scene after scene. In that Times interview, Jackson reveals that Wilson once said he was trying to create with his female lead in “The Piano Lesson” a character “as large as Troy was in ‘Fences.’”

What he did instead was create a character in Boy Willie who is larger than Troy. At least, that’s the way Washington (son of Denzel) plays him in a spectacular Broadway debut. In the 1990 Broadway production, Charles S. Dutton was loud and buoyant in the role. Washington brings many more shades of purpose and defiance to Boy Willie, and he never begs for approval — that is, he doesn’t go for the easy laughs the way Dutton did. More often, Washington leaves the comedy to his partner in crime and business, Lymon (“Justice League” star Ray Fisher). When the two men aren’t selling watermelons, they plot to take that piano out of Berniece’s living room.

Under Richardson Jackson’s direction, they also deliver a comedy act, with Washington playing the wily hare to Fisher’s dimwitted turtle. (We know which man wins this race, at least when it comes to women.) After Washington dazzles with his rapid-fire staccato of a sales pitch to sell that old piano, Fisher slams on the brakes with retort after retort that comes smothered in molasses, if not tar. It makes for great theater to watch two such talented actors bounce off each other and create such sparks.

Between Boy Willie and Berniece, their uncle Doaker plays peacemaker. It’s something of a shock here to see Samuel L. Jackson (husband of LaTanya) put aside his alpha-male persona, honed not only in the movies but in that original 1987 production of “The Piano Lesson,” in which he played Boy Willie. Our memories of those past, very different performances go a long way toward making this Doaker a most effective referee, even though he consistently agrees with his niece. More visceral is the slow onstage collapse delivered by Michael Potts in the role of the dissolute uncle, Wining Boy. By nearly matching the size and intensity of Washington’s performance, Potts shows that his character’s inebriated present is more likely to be Boy Willie’s future than anything represented by the level-headed Doaker. 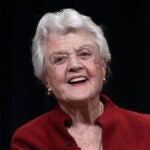 “The Piano Lesson” keeps trying to teach us that the family is supposed to keep the piano. Not only was it made and cared for by ancestors, it is also haunted by the slave owner who claimed it for his own, just as he owned those same bodies and faces that remained carved into the instrument. Unfortunately, even with the considerable help of Jackson’s performance as Doaker, Danielle Brooks’ generic matriarch never makes the strong case for keeping the piano. Brooks needs to match, if not outshine, Washington. Perhaps no actor could. But a real dramatic misfire takes place when her Berniece runs upstairs after a big showdown with her brother and she returns with a pistol, to everyone’s shock. We brace for a real standoff. Brooks then sheepishly puts the firearm in the pocket of Berniece’s robe, as if she’s suddenly had second thoughts.

Richardson Jackson follows that dramatic fizzle with a muddled nightmare in which Berniece sings and plays the piano, finally, and Boy Willie does battle with what appears to be a hologram of the dead slave owner (projection design by Jeff Sugg). Having confronted and beat that demon, he tells his sister that she’s been right all along about the piano. Under Lloyd Richards’ direction of the 1990 Broadway production, Boy Willie’s battle was played upstairs and offstage, giving the understated but magnetic S. Epatha Merkerson the chance to hold the stage all on her own.

Merkerson’s piano-playing cast out the ghost, not Dutton’s hand-to-hand combat with the dead slave owner. Richardson Jackson clearly wants us to see the exorcism as a joint effort, but the end result is something else: Brooks is once again upstaged. In the wake of two such mismatched performances, the brother’s last-minute capitulation to his sister feels forced, if not downright fake. It’s not unlike when the cops show up in the last scene of a late-1940s film noir to put everything back in order. Emphasizing that falseness is scenic designer Beowulf Boritt’s fractured house set, which uneasily puts itself back together as Japhy Weideman’s lighting goes to black.

One other big caveat: There’s no argument with the casting of Fisher and Potts, except for the fact they would never wear the same size clothes (costumes by Toni-Leslie James). When Wining Boy now sells his old silk suit and Lymon tries it on, the arms being woefully too short, the costume change turns into an act of extreme humiliation. Needless to say, the audience at the Barrymore loved it. Curiously, when Lymon later tries on the trousers, the audience reaction was far less boisterous. Those pedal-pusher-size trousers are now very fashionable, unfortunately. 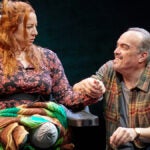