How Pixar Navigated Religion and Race in ‘Soul’

TheWrap awards magazine: ”We said, ‘Let’s try to steer clear of anything that would upset people — either that, or we should try to offend everybody,'“ says director Pete Docter

A version of this story about “Soul” first appeared in the Oscar Nominations Preview issue of TheWrap’s awards magazine.

The first Pixar movies had simple, easy premises: What if your toys came to life when you left the room? What if there really are monsters in your closet? But Pete Docter, who is now Pixar’s chief creative officer as well as a director for the company, seems determined to change that.

“CG (animation) in general was shocking when ‘Toy Story’ came out,” Docter said. “We’re constantly trying to provide that perfect balance of things that are relatable and identifiable, so that people recognize themselves in what we’re doing, but also hopefully surprising them as well. So that you feel, ‘Oh, this is an aspect of my life I’ve not really seen before, at least in this way.’ All of the stuff that I’ve done so far, I try to center around that – it’s our world, but looking at it from a different angle that maybe allows us to see it a new way.”

His 2015 film, “Inside Out,” was about the emotions that live inside a young girl’s brain — and his new one, “Soul,” which won the Golden Globe for animated film and was nominated for 10 Annie Awards, is set partly in New York City but partly on a supernatural plane in a world of spirits that enter our bodies when we’re born and leave when we die.

“‘Inside Out’ kind of prepared me for this,” he said. “It was like a training boot camp, because even as abstract as it was, we could measure and look at research on emotions. It was really looking inward to what’s going on inside our heads and in our bodies. And I feel like this movie is looking at who are we beyond our physical body, and do we have a purpose in our lives?

“Those are big questions, but why not? Animation is only limited because we’ve kind of put it there. It really has this incredible capability of talking about and doing almost anything we want.”

Docter said “Soul” was partly inspired by looking at old photos of his son, who was heading off to college. “I was looking at pictures of him as a baby, and even as a newborn, he already had a personality, which kind of scrambled my brain. Like, where did that come from? How is it that somebody who’s never spent a moment in the world comes with a sense of who they are? So I explored the idea of, well, it must be a place beyond our own world where those attributes are given to us.”

But what does that place look like? For Docter, answering that question meant designing a soul world while steering away from depictions that might offend religious viewers who have strong ideas about the afterlife. “That was a big concern early on,” Docter said. “Even the counselors who are the guiders of new souls, we had some early attempts where they looked almost like angels. And we said, ‘Let’s try to steer clear of anything that would upset people. Either that, or we should try to offend everybody.'”

They settled on a world in which the counselors appear to be two-dimensional figures made of “energy squeezed into tiny tubes of light — a little bit like wire sculpture, like something you might see in an Alexander Calder piece. The funny thing is, in the planning stage we thought, ‘It’s a line, it’ll be easy!’ And it turned out to be one of the hardest things we’ve ever done.”

Here are the progression images for a scene set in the soul world: 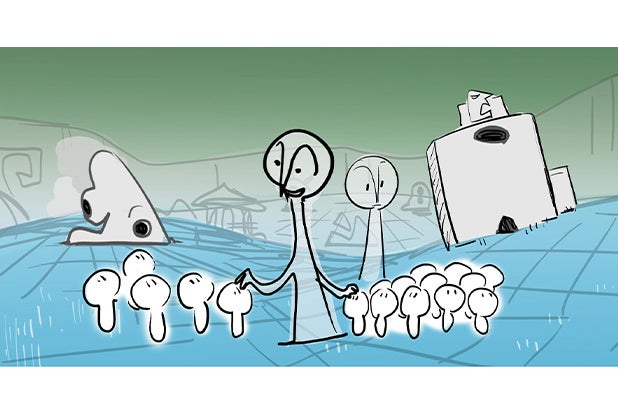 Storyboard by story artist Hyein Park, one of 266 for this sequence 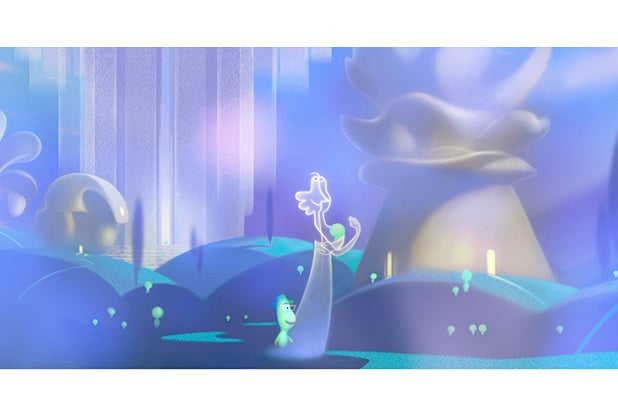 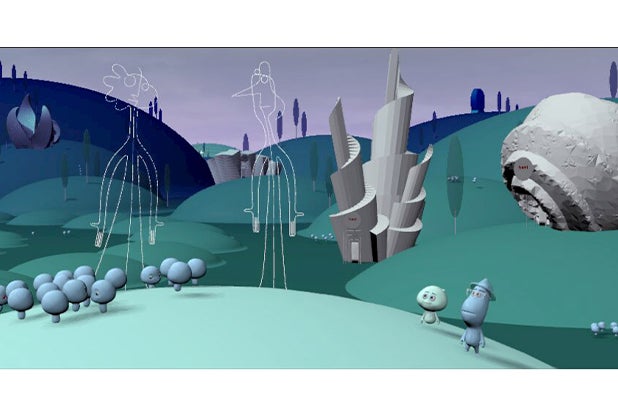 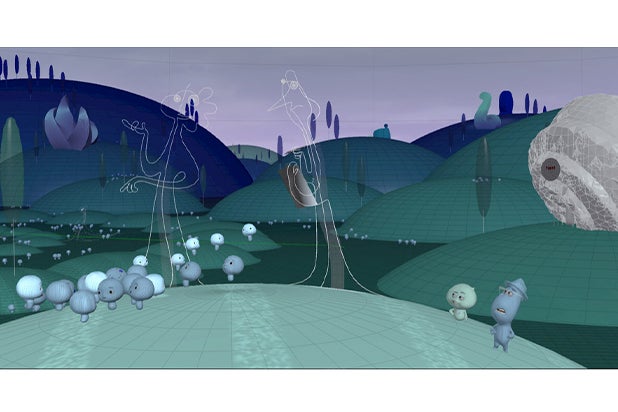 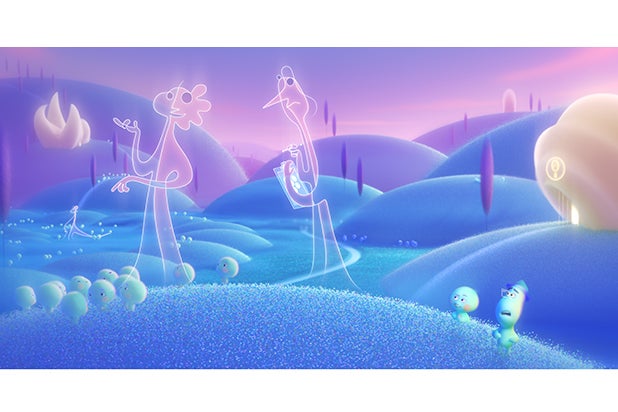 Also difficult: the creatures from which the film gets its name. “What does a soul look like?” Docter said. “It’s an ephemeral nonphysical being, and we needed to find some way to have something actually there or we wouldn’t have a movie. So we hit on this foggy, vaporous kind of thing which was like nothing we had done in character work before. It took quite a bit of research to figure out how to pull that off and give it volume and dimension.”

While some of the movie takes place in the world of souls, most of it is set in New York City, where the lead character, Joe, is a struggling jazz pianist. And brought its own challenges – because Joe, voiced by Jamie Foxx, is Pixar’s first Black hero. (The film’s co-director and co-writer, Kemp Powers, is the first Black man to work in those capacities for a Pixar feature.)

“When we chose Joe to be a jazz musician, it felt like it was the right choice for our character then to be African-American, since that’s the culture from when jazz came from,” he said. “And that opened a whole Pandora’s box. We could get this so wrong, and there’s no real clear definition of when it’s wrong because everybody comes from different perspectives and looks at things in the world in a different way. We tried to employ as many different people as we could, specifically musicians who have been through that all so that we could draw as much from their own specific lives and be as truthful and authentic as we could.

“For me, having worked on ‘Monsters Inc.’ and on a film about an old man and a little kid, that was a new challenge that I wasn’t really fully prepared for. I just tried to be as open and listen as much as I could. But it added stuff that we really had to deal with on a daily basis, in addition to figuring out the story and the production and all that.”