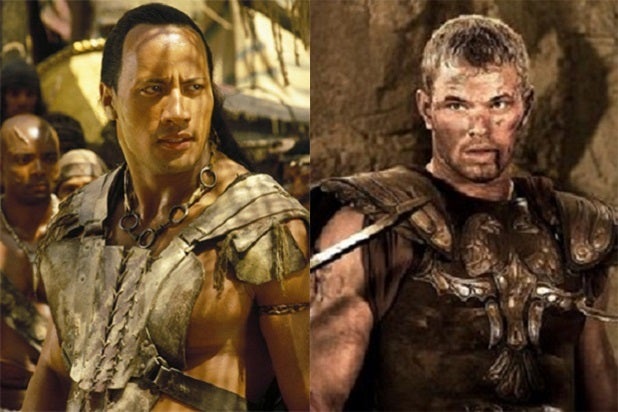 Last March, the President-in-peril movie “Olympus Has Fallen” opened to a stunning $30 million and wound up taking the steam from the similarly themed (and more expensive) “White House Down,” which flopped in summer.

There will be a similar set-up this week, when Summit Entertainment on Friday rolls out the action-adventure film “The Legend of Hercules,” a $40 million action adventure directed and produced by Renny Harlin and starring Kellan Lutz (“Twilight”).

In July, Paramount and MGM will be releasing “Hercules: The Thracian Wars,” a $110 million sword-and-sandals saga directed by Brett Ratner and starring Dwayne Johnson. That will be six months from now, and it will cut a much wider swath at the box office, most analysts believe.

Also read: Box Office: 2014 Will Likely Be Down, Because Not All Sequels Are Equals

Parallel plot lines aren’t at all unusual in the movie biz – insert joke about Hollywood creativity here – as a number of same-theme smack-downs have shown. Here is how a few of the match-ups played out over the years:

“Dante’s Peak” vs. “Volcano,” 1997
This tectonic toss-up was close, but the first film to theaters won out. Universal’s bigger-budgeted “Dante’s Peak,” starring Pierce Brosnan, opened in February and brought in $67 million domestically and $178 million worldwide. The lava flowed again just two months later, and Universal’s “Volcano,” with Tommy Lee Jones as the lead, took in $49 million in the U.S. and made $122 million worldwide.

“Antz” vs. “A Bug’s Life,” 1998
This one was a blowout. Pixar’s “A Bug’s Life,” with Kevin Spacey, Hayden Panettiere and Denis Leary, opened in November and went on to bring in $162 million domestically and more than $360 million globally. DreamWorks Animation’s “Antz,” which opened a month earlier and featured bigger names like Woody Allen, Sly Stallone, Sharon Stone and Jennifer Lopez, finished with $90 million domestically and $111 million worldwide.

“Armageddon” vs. “Deep Impact,” 1998
What are the odds of a giant space rock hitting earth? Smaller than two giant space rocks hitting the earth, but that’s what moviegoers were looking at this summer.

“Chasing Liberty” vs. “The First Daughter,” 2004
Mandy Moore played the rebellious daughter of the President (Mark Harmon), who finds love in “Chasing Liberty.” Katie Holmes played the daughter of the Chief Executive (Michael Keaton), who finds love in “The First Daughter,” which was directed by Forest Whitaker. Moviegoers elected not to show up, and both of them bombed.

“Paul Blart: Mall Cop” vs. “Observe and Report,” 2010
Kevin James swamped Seth Rogen in this comedic battle of badges. The PG-rated “Paul Blart: Mall Cop” opened in January and was a hit for Sony, taking in $146 million domestically and $183 million worldwide. The R-rated “Observe and Report,” in which Rogen plays a security guard tracking a flasher, was considerably darker. It debuted three months after “Blart” and managed just $26 million domestically.