Roman Polanski’s latest film, "The Ghost Writer," premiered Friday at the Berlin Film Festival, but the director was still in Switzerland, where he’s under house arrest.

However, he received positive news on both fronts.

The Swiss Justice Ministry told the Associated Press it would make "no sense" to shift Polanski from house arrest at his Gstaad chalet unless and until U.S. courts rule definitively that he must be sentenced in person to further jail time for having sex in 1977 with a 13-year-old girl. 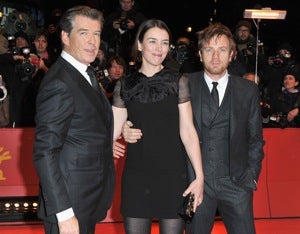 Polanski lost a bid last month to be sentenced in absentia without returning to L.A.; Judge Peter Espinoza ruled that Polanski must be present in court if he wanted to resolve the case. Polanski’s attorneys have until late March to file an appeal.

"Even if we decide on extradition, he can still appeal. This would take many months," Wyss added.

Meanwhile, the 76-year-old filmmaker was the ghost at the premiere of his film in Berlin. "The Ghost Writer" stars Pierce Brosnan as a former British prime minister and Ewan McGregor as a reporter hired to help him write his memoirs. It’s based on Robert Harris’ novel (pictured at the premiere with co-star Olivia Williams; Getty Images).

Polanski had nearly finished the film when he was arrested Sept. 26 as he arrived in Zurich to accept a lifetime achievement award at a film festival. He finished editing the film while in prison and then while under house arrest.

Summit opens "Ghost Writer" in limited release in the U.S. on Feb. 19.

"It’s a great pity he’s not here to launch the film with us, because I feel like he’s as responsible for my performance in this film as I am," McGregor said at the press conference in Berlin, where the cast largely steered clear of the director’s legal issues.

"That Roman Polanksi is not at the center of this podium is something that is very strange for all of us," said the film’s producer, Robert Benmussa, according to the Hollywood Reporter.

"He is an intense director who has lived a very intense life," said Brosnan, whose character, clearly modeled on Tony Blair, is accused of war crimes. "We all knew we had to be on the top of our game for this great man."

In early reviews, the Hollywood Reporter says Polanski is in Hitchcock mode, and predicts the film will be successful both domestically and abroad. However, despite its "moody atmospherics" and strong performances, "it’s hypnotic as it unfolds, but once the credit roll frees you from its grip, it doesn’t bear close scrutiny," the paper says.

Variety, meanwhile, says the film is a too-literal translation of Harris’ book to the screen, and doubts its box office viability. "All the ingredients are here for a rip-roaring political thriller, with corruption in the highest places and a cast of sexy and/or suspicious characters, but for the first hour there’s little accumulated atmosphere or any sense of a bigger story hiding in the wings. Polanski simply transfers Harris’ undistinguished prose direct to the screen and, though the pace picks up marginally in the second half, there’s little wow factor in the revelations as they appear," the paper says.