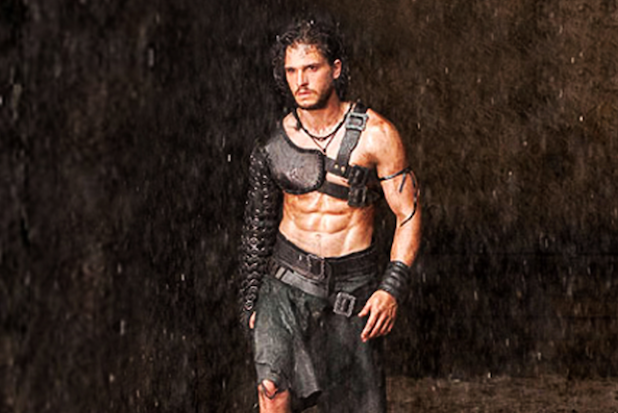 Critics are bubbling over like Vesuvius with put-downs of the (unintentionally?) campy new action film “Pompeii.”

So far the latest from critical punching-bag Paul W.S. Anderson (director of such never making the Criterion Collection films as “Alien vs. Predator” and “The Three Musketeers”), is being declared a hot mess. It currently holds a 40 percent “rotten” rating on Rotten Tomatoes.

“Pompeii” stars “Game of Thrones” hunk Kit Harrington and “Sucker Punch” star Emily Browning. It carries a reported budget of $100 million and the assurance that no real volcanoes were harmed during the making of the film.

TheWrap’s Alonso Duralde poured lava all over the performances and the production, calling it a “Titanic” retread that is as awful as feared.

“Even those who hated James Cameron‘s hit romance will find themselves thinking more kindly of it after they watch Browning and Kit Harington moon over each other with one facial expression between them,” Duralde wrote.

Kevin Jagernauth at IndieWire was more savage, handing the production a failing grade. Saddled with a tepid script and director, the film never roars to life, he claimed.

“If you do watch ‘Pompeii,’ bring an iPod, because you won’t be missing much and at least you’ll be spared the strident score by Clinton Shorter,” Jagernauth wrote. “But your eyes won’t deceive you that yes, you are watching a filmmaker crudely put together a movie with all the grace of a preschooler using their pudgy fists to awkwardly fit square pegs in the square holes.”

Jordan Mintzer of The Hollywood Reporter acknowledged that when the mountain pops its top it’s visually stunning, but implied the rest of the film just blows.

“With a central love story that feels contrived from the very first note, the major pleasure here is seeing it all blown to smithereens as quickly as possible, resulting in a movie that will have far less staying power than Pompeii’s infamous ash-covered victims,” Mintzer wrote.

“The eruption itself makes for some pyrotechnic thrills but the action and romance don’t produce many sparks in ‘Pompeii,’ director Paul W S Anderson’s corny 3D adventure set against the volcanic destruction of the Roman city in 79AD,” Hazelton wrote. “And it’s no sure thing that the explosions will be enough to turn this big budget — reportedly $100m — indie outing into a significant money-maker.”

But every film has its partisans and “Pompeii” found a valiant defender in Roger Moore of the McClatchy-Tribune News Service, even though he acknowledged the acting and script could have used a lift.

“What Anderson delivers this one time is a genuine spectacle, a gladiator movie with a volcano in the middle of it,” Moore wrote. “‘Pompeii’ has a first rate effects team that recreates the living hell of Pompeii as it is buried under ash, pumice and fire. It has a fight choreographer from ‘300.’ And though I thought I’d never type these words in association with a P.W.S. Anderson picture, it’s not half bad.”

If “Pompeii” could endure molten lava, it can sustain a critical roasting.