There are several blondes sitting poolside at the Beverly Wilshire Hotel, but most of them are bikini-clad and not here on business.  Even in sunglasses and long blonde tresses, Lone Scherfig is clearly the odd-woman-out in this quintessentially SoCal setting. In town for the premiere of “An Education,” her delightful, knowing, funny coming-of-age story that ought to be on everybody’s Oscar shortlists, the Danish director handles her promotional chores with a kind of unassuming eloquence she shares with her film.

Set in a distinctly non-swinging London in those gray days before the Beatles helped change everything, “An Education” follows a teenaged schoolgirl (Carey Mulligan) who falls under the spell of an older, cultured man played by Peter Sarsgaard. Written by British novelist Nick Hornby, the film is a distinct change for Scherfig, whose earlier films, among them “Italian for Beginners” and “Wilbur Wants to Kill Himself,” were associated with the rigorous, radical Dogme 95 movement co-founded by Lars von Trier. (Scherfig photo by Kerry Brown/Sony Pictures Classics) 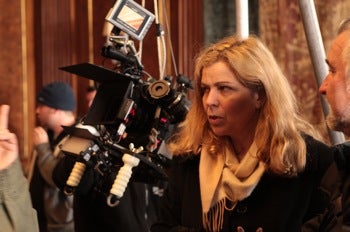 From the premiere last night at the Egyptian to poolside at the Beverly Wilshire Hotel, this has been quite the Hollywood experience for you.

I know, I know. I love the neon, and the architecture, and people driving by in those huge cars. I’d be an idiot if I didn’t enjoy this. Of course you are nervous, but now there’s not so much to be nervous about, because we can’t change the film, and it’s sold all over the world. I think the strategy of going to Sundance, and then both Berlin and Telluride, was right. The fact that it was sold all over the world before the crisis took off in this business was good.

How are you dealing with the Oscar talk, the awards buzz?

I’m really happy for Carey, because it means that she will get better scripts, and get the attention she deserves. And Alfred Molina, too, because he was so disciplined and diligent and humble. He felt at home in the script, and he immediately got the combination of humor and fragility and sadness. I think he did a brilliant job, and he deserves the praise he’s getting.

What did you do to feel at home in the script? Obviously, it’s not a country you grew up in, or a period that you were old enough to remember.

I was in England a couple of years later, just a little bit. And I’ve shot things that took place in the late ‘50s, so I’ve researched the period. But that was in Denmark, and England is really a very different place. It’s not just that they drive on the other side of the street – it really is an island.

So I researched more than normally. And the art department did a lot for everyone. I knew that a lot of the cast members also wouldn’t feel at home in that period, so in order to take them on a guided tour, we had rooms with pictures all over the place. I did a big picture board to visualize each one of the characters. And I listened to the art department, listened to the costume designer, more than I normally do, because they had an expertise that I couldn’t possibly have.  Having said that, the producers did give me a lot of space and freedom. I think they know if they call in a strange east European Dogme director, they are open for something that is unpredictable. But the film, I hope you can’t tell that it’s made by someone who is not fit for the job. (laughs) It looks pretty slick and normal.

What was it about Carey Mulligan that appealed to you?

She’s very real. There’s never anything phony about her. There’s not much façade – she’s an open book and she’s really easy to read. And I thought she was someone who could carry a film, which is different than playing a part. A lot of film acting is about being someone that you, as a viewer, can project your feelings into.

As we shot, it was as if you could open up more and more facets of her, more and more aspects to Jenny. It was really interesting to fold her out. When she’s at home in her house, those were some of the last scenes we shot. And there you see her whole range, as a character and an actress.

As a director, what were your priorities in telling the story?

You shouldn’t feel that you were there to see a director or a cinematographer or even a scriptwriter. It’s about seeing Jenny, and being seduced by David the way she and her parents are seduced. And I think it’s important that you feel that you’ve been in that era. It’s a very contained and layered script, and everything is there for a reason. Every line adds something important to the overall story. So if you can enter that little glass vase, that’s good.

I’ve seen it twice now – and the second time, knowing what happens, my feelings about the relationship and about Peter’s character were quite different.

Yes. If you see the film twice, you can see what Peter Sarsgaard has done. It was there all the time, and you just didn’t see it because you didn’t want to, the way no one else wanted to. Peter was really good at knowing when to reveal each facet of David. And Peter and I talked about it – David never lies. He believes it.

I also noticed that when I saw the film in a bigger room, the humor really came across.

Isn’t comedy very often like that? It is rewarding to sit there and see that people laugh everywhere that you had hoped. And Nick is such a generous person. The way he wrote the script, and his books too, it’s such an act of generosity. Lynn Barber’s original piece (a memoir on which Hornby based his screenplay) is tougher and more ironic and sarcastic. But as soon as you start writing about others, you can do it with more affection.

Was it tricky to find that balance, to bring out the humor in what are very serious, life-changing situations?

I don’t see it as a problem. I see humor as a way of being emotional without being too syrupy. I made my film “Wilbur Wants to Kill Himself,” where it’s a comedy but he’s suicidal – I talked to suicide groups and self-help lines, but in that film you have an audience laughing at something that’s horrific. And it’s not a scary laugh, it’s a warm, affectionate laugh.

So in this film, you have scenes … The clearest example is at the petrol station, where you have Jenny’s parents in the back seat playing out a comedy where the door handle breaks. And then Jenny is in the front seat having a breakdown. You can absolutely have comedy a little bit out of focus, and a girl who’s losing her innocence in a very serious way, in the same three-shot.

Did you always have a sense of how you wanted to tell the story visually?

Yes. Cinematically, the movie has to get under the skin of the characters. It’s definitely very much a reaction shot film – but on the other hand, as soon as it’s comedy, you want to pull back a little. Alfred Molina is not a closeup actor. You want to give him space in the frame to move around. You need to adjust the camera moves a little bit to the genre that you’re in.

It’s not a film where you show off your craft. It’s a film where you just look at things through her eyes, or just watch what’s happening in a room. And if there are crane shots, and quite a few tracking shots, you shouldn’t notice that they’re there.

But the scene where they steal the map and jump in a car, the editing is much wilder and the camera is hand-held, and it’s much more Dogme style, because her little world is shaking. So there is a logic to it. And I talked a lot about that with (cinematographer) John DeBorman. He is half French, and he loves the new wave films as much as I do. And that heritage, from neorealism to new wave to the English free cinema of that period to Dogme, is a little tour through part of film history. And this film somehow belongs on that track.

But at the same time, you also drew from traditions well outside that particular track.

Yes, yes. (laughs) We wanted the film to look good. We used some very elaborate lighting in some scenes, and it was great to be able to build the whole house as a set, and plan the angles we needed to tell the story the way we wanted to. That’s something you couldn’t do with Dogme.

So is the Dogme director getting all slick on us?

Well, we have little things that keep the film from getting slick. There’s one moment where Danny (Dominic Cooper) says to David, “Do you know what you’re doing? I don’t want her hurt.” That’s the only moment Jenny’s not in. And I remember I talked to Nick about it, saying “Look, you’ve written this scene, and technically it’s breach of style for the audience to see something the main character doesn’t see.” But we decided to keep it there. I mean, the film police would fine you for it, but it works that the audience gets an open door to something it shouldn’t have seen. So I used a long-lens shot where Jenny does something with her hands, and they see her and talk about her. The scene doesn’t really belong in the film, but it adds something to the overall package. And these little formal flaws help the film not get too slick.

Any idea what you’ll do when the movie comes out and awards season runs its course?

The interesting thing, I always thought I didn’t want to make a film that didn’t have humor, or didn’t have a love story. But I think I’m going to move away from that now. I’d like to do more men in suits and more cars. Especially being here in Los Angeles, driving around where you have the shiny cars and the dim streetlamps and the tradition of American film noir. I think that’s really what I should do.