Pop Smoke was shot and killed last February in a Los Angeles rental home by a 15-year-old who was part of a group trying to steal the 20-year-old rapper’s diamond-studded Rolex, according to a detective who testified in the case on Friday.

The teenager, who is the youngest member of the group of four suspects who are being prosecuted in the Feb. 19, 2020 murder and robbery case, confirmed he had shot Pop Smoke (né Bashar Barakah Jackson) during a recorded interview with a cellmate at a juvenile detention center last May, according to Los Angeles Police Department detective Carlos Camacho.

“He admitted that he shot the victim three times with a Baretta 9 (mm.),” Camacho said at a preliminary hearing for Corey Walker, another one of the four defendants in the case, according to the New York Daily News. Walker pleaded not guilty in the case. 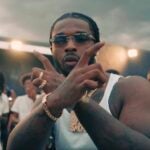 The teenager accused of shooting Pop Smoke “admitted that they asked for the jewelry” and then had “a confrontation” with the rapper, Camacho said. The juvenile suspect’s name has not been disclosed.

The detective said the suspects were also trying to steal Pop Smoke’s Cuban link chain, but were only able to take the Rolex, which he said they resold for $2,000.

Public testimony in the case of Jackson’s death began Thursday, with LAPD detectives saying the four suspects were part of the same same gang. According to the detectives, the suspects learned the rapper was staying at an Airbnb rental in the Hollywood Hills from his Instagram account, where they read the address off a gift bag label in a photo that included a large amount of money.