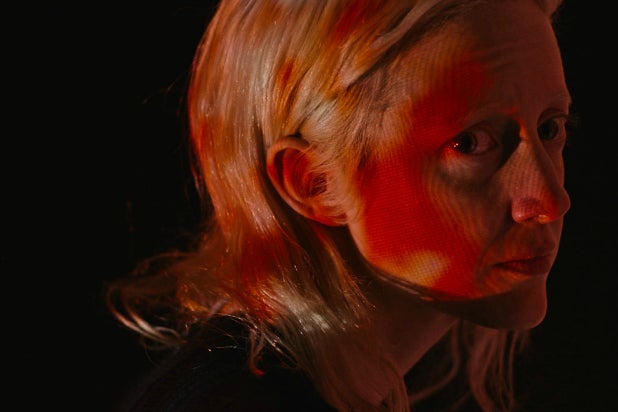 What better title for Brandon Cronenberg’s initially intriguing second feature than “Possessor”? For one thing, his techno-thriller stars Andrea Riseborough (“The Death of Stalin”), whose chameleonic gifts are as impressive as they remain underappreciated. This, of course, makes her an ideal choice to play a virtually anonymous woman whose career involves burrowing into other people’s brains.

But there’s a bit of defiance in that name, too. When your dad is most famous for expanding the concept of body horror, and you make movies about the very same thing, you can either chafe at inevitable comparisons or go out of your way to acknowledge them.

So does Cronenberg possess the talent of his genre-defining father, David? Well, despite the titular provocation — and openly clear influences — that’s not really a fair question. What’s more pressing is this one: Does he possess the talent to make movies we’ll want to watch?

He certainly has the skill. Like Cronenberg’s debut feature, “Antiviral,” this effort is gorgeous to look at it. In fact, it’s so well crafted that it’s likely to make a lot of other films at this year’s Sundance Film Festival feel relatively amateurish. But as both writer and director, Cronenberg focuses so intently on the surface that he neglects to include enough substance.

He doesn’t, for example, give us any background to his high-concept story: In an inexplicably sterile lab, a supervisor named Girder (Jennifer Jason Leigh) oversees the latest assignment for her star employee, Tasya (Riseborough). It’s Tasya’s job to remotely implant her thoughts into someone else’s body and then guide them to commit murder for Girder’s mysterious company.

Right now, she’s required to “inhabit” Colin (Christopher Abbott), a handsome grifter who dates Ava (Tuppence Middleton), the daughter of an evil millionaire named John (Sean Bean). John is the target, but for some reason Tasya is having a hard time with her latest task. Perhaps all the killings have caught up with her soul, or maybe the ignorance of her kind husband (Rossif Sutherland, “Catastrophe”) and young son (Gage Graham-Arbuthnot) are weighing on her conscience. Then again, it could just be that the technology, or the technicians applying it, are letting her down.

Regardless, it’s safe to say that things are going dangerously awry. But a high-stakes plot requires emotional investment, of which little is ever generated either onscreen or off.

Cronenberg has worked overtime on the things that interest him, which is to say the violence and visuals. As a result, the many scenes of macabre aggression push well past bloody into brazenly grotesque, and each one lasts long enough to make audiences squirm — some out of discomfort, but others, especially as the body count grows, from impatience.

He’s most in his comfort zone when nudging us out of ours, so scattered amid Karim Hussain’s slick cinematography are plenty of well-designed, deftly disorienting visual effects and images. What’s missing, though, is a single character to care about, or even a moderately convincing explanation for this dystopic fantasy.

Why would a woman who appears to love her perfectly normal family lead a double life in which her purpose is to kill strangers? How is it possible that her husband has never noticed anything odd about her jolting absences? And why does Cronenberg replace Riseborough so early, to follow Colin’s POV through Abbott while Tasya lies inert in the brain-swapping device?

While Abbott does fare a little better with his expanded role, Leigh does not appear to have been given any motivation whatsoever. We never learn why Girder behaves in such an amoral fashion, what is driving her work, or why, for that matter, her personality consists of little beyond Leigh’s carefully presented bundle of mannerisms.

Also Read: 'Small Axe: Mangrove' Film Review: Steve McQueen Exposes the Police Brutality of the Past, and the Present

This being the case, solemn dialogue about “minor artefacting,” “synch loss” and “pulse analysis” feels like playacting, rather than the language of a thoughtfully-created world. When one endangered character flatly says, “Get out before I call the police,” and the other responds, “Why don’t you make me?” it’s easy to feel a filmmaker is simply connecting the dots until he can arrive at his grisly, and altogether unearned, endpoint.

Jim Williams’ febrile horror score adds to the increasingly dispiriting sense that Cronenberg is less interested in complexity than in ostentatious jolts. The biggest surprise, though, isn’t found in the squishy mutilation or emotional decay. It’s in the fact that he’s blessed with a brilliant actor who allows each of her roles to possess her, and he chooses to hide her away in a lab machine.