But in one sense it was completely different: While in previous years, Sundance opened with a single film that received an overwhelming amount of attention from everyone in attendance and had to represent the entire spirit of the festival itself, newbie festival director John Cooper decided to take a different approach, littering a quartet of opening night events across town: two competition films screened back-to-back at the massive Eccles Theater, while short films and experimental works were unveiled on the bustling Main Street. 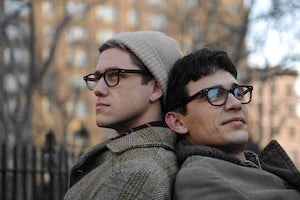 To a certain extent, this did seem to diffuse the tension. Nevertheless, the first competition film of the night, Rob Epstein and Jeffrey Friedman’s "Howl," took on some of the aura of opening night mayhem: The room was crowded, packed with energy and chatter as familiar industry faces darted about.

James Franco, who plays Allen Ginsberg in the film, made an appearance — as did fellow castmember Jon Hamm. Audience hopefuls wandered through the parking lot in desperate search of tickets. To Sundance regulars, it felt quite familiar.

The second competition screening of the evening changed all that.

"Restrepo," a powerfully involving nonfiction portrait of U.S. soldiers stationed in a valley in Afghanistan, contains a remarkable up-close perspective of soldier camaraderie and battlefield death. Directors Tim Hetherington and Sebastian Junger refuse political or militant readings of their subjects, aiming instead for an emotional reality and slow-burning temporal groove that suggests a real life version of "The Hurt Locker."

Only, it’s more than that — as the soldiers construct a fort in the middle of the wilderness named for their fallen colleague, the movie turns into a meditation on contemporary wartime coping mechanisms. In that sense, it’s an unprecedented work of art and left the room appropriately stunned.

Michael Moore was spotted quietly exiting the theater alone at the end of the night. Anything that leaves the world’s most rambunctious cinematic polemicist speechless deserves a second look. Hopefully, that’s what "Restrepo" will get once Sundance comes to a close.