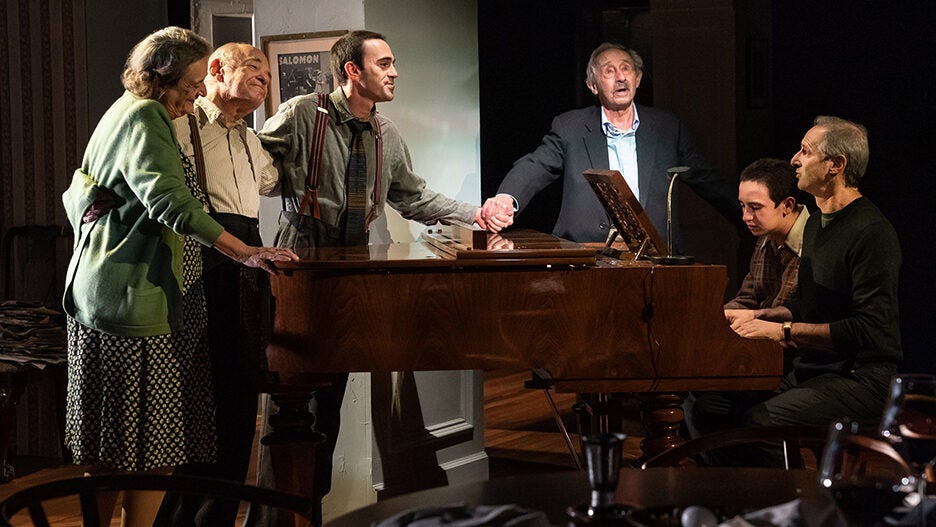 It is one way for a playwright to cover a lot of territory in record time. Create a character who is bipolar – or, to use an old term, “manic depressive” – and set her down with a character that has already been established as naïve and rather uninformed – or, to use a better word, “American” – and then have the emotionally challenged one go off on a long rant that covers the subject of anti-Semitism for the past several decades. It’s the kind of scene that invariably elicits applause when it’s finished. It is a tour de force — or, to use another term, “indulgent.”

“Prayer for the French Republic,” which opened Tuesday at Off Broadway’s Manhattan Theatre Club, doesn’t take short cuts elsewhere to tell a generational tale of a persecuted Jewish family living in Paris. In his new play, Joshua Harmon cuts between the Benhamou family living in 2016-17 and an earlier generation of the wife’s family, the Salomons, living there in 1944-46. Only one character bridges the two groups.

The scenes taking place in the 1940s focus on an elderly couple (Nancy Robinette and Kenneth Tigar, giving beautiful, understated performances) who hide out in their apartment to survive the war. Eventually, they are reunited with their son (Ari Brand) and grandson (Peyton Lusk) after the Holocaust. 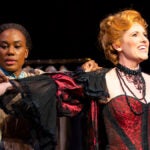 The years 1944 to 1946 don’t need any explanation. And maybe the years 2016 to 2017 don’t either: It’s when Donald Trump was elected president of the United States and Marine Le Pen was defeated in her bid to be president of France. The American character (Molly Ranson), present in the 2016-17 years, is a distant relative from New York City. Molly can’t eat enough croissants. They’re so much more delicious than the ones she bought back on the Upper East Side. Molly tells the Benhamous she’s in France for the school year to learn French, but she’s really there so the psychiatrist mother (Betsy Aidem) and the medical-doctor father (Jeff Seymour) and their bipolar daughter (Francis Benhamou) and their instructor son (Yair Ben-Dor), who has survived a brutal beating, can explain names like Marine Le Pen to anyone in the audience who doesn’t read a newspaper.

Molly also has some pretty harsh things to say about the “apartheid” policies of Benjamin Netanyahu (whom she has heard about), which provokes more than a few arguments. Fearing for their safety in modern-day France, the Benhamou family is considering moving to Israel. And how can this American complain about Israel when she’s from an island that used to be inhabited by indigenous people before they were exterminated so someone could build the Empire State Building? 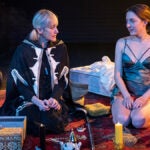 “Prayer for the French Republic” is a didactic play, and aside from the bipolar screed, the arguments flying back and forth captivate and hold our attention for more than three hours. Harmon writes smart, easy, often funny dialogue. Sometimes that dialogue is maybe a little too easy and funny. While the young American character is often the butt of patented French arrogance, that Gallic superiority seems more than a little out of place in this play. The Benhamous don’t sound as if they grew up watching American TV. They sound like they are living inside an American TV set dialed to HBO. What they say is often very amusing. Despite the tough subject matter, “Pray for the French Republic” is a very entertaining play. Its plus three hours fly as if you’re bingeing on “Curb Your Enthusiasm,” where Larry David comes in to goose up their dialogue. David Cromer’s lively direction does nothing to dampen this impression.

Harmon and Cromer set an entirely different tone with the scenes set in the 1940s. While the dialogue is beautifully stylized, it never turns arch. The actors are speaking English, but we accept that the characters are French citizens speaking their native language.

In an age in the theater were nontraditional casting abounds, the family of four here really look and act like they’re blood relatives. In fact, all of the father-son pairings in this production will have you checking the Playbill to see if these guys don’t share the same last name. Not to reveal too much here, one of those characters (Pierre Epstein) bridges the two groups to make a late-in-the-play appearance. It is not tour-de-force showy like the bipolar explosion earlier in the play. This is tour-de-force writing and acting that ties up all the didactic arguments and turns them into art, as well as a wonderfully shared experience.