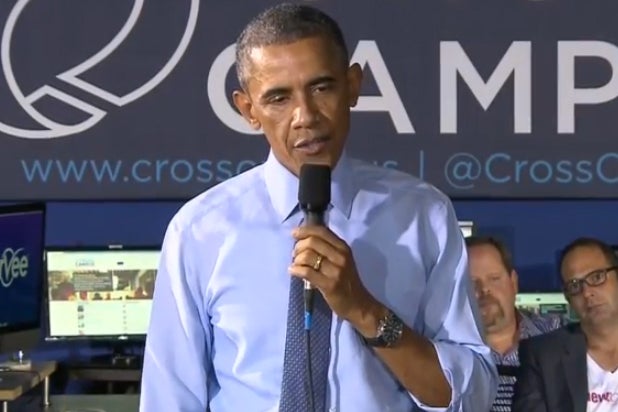 President Obama on Thursday used a stop in Santa Monica to reaffirm his support for net neutrality and his expectation that the FCC move forward to ensure Internet providers don’t reserve a high speed lane for favored content providers.

Answering a question during a town hall at Cross Campus — an organization dedicated to helping startups and entrepreneurs succeed — Mr. Obama said he was “unequivocally committed” to the Internet being a neutral platform, where everyone can equally compete.

“It has unleashed the power of the Internet and we don’t want to lose that,” he said.

The FCC, which lost a court challenge of its last Open Internet regulatory effort, is considering a revised one offered by FCC Chairman Tom Wheeler.

While Wheeler’s original proposal wouldn’t bar so called “paid prioritization” schemes, in which service providers give favored content providers a more robust path to consumer desktops in return for a fee, Wheeler and several Democratic members of the FCC have indicated they are considering far stronger protections including a net neutrality-like ban on paid prioritization.

The President said Thursday he favors that kind of ban. “There are a lot of aspects to net neutrality.  I know one of the things that people are most concerned about is paid prioritization, the notion that somehow some folks can pay a little more money and get better service, more exclusive access to customers through the Internet,” he said.

“That’s something I’m opposed to. I was opposed to it when I ran.  I continue to be opposed to it now.” He added that the FCC remains an independent agency but “My appointee, , knows my position.”

The FCC is also considering whether its open Internet rules should apply just to landline Internet connections or to mobile connections as well.

In a statement late Thursday the Internet Association, whose members include Amazon, Google, and Netflix, praised Obama’s net neutrality statement.

“President Obama made clear tonight that a functioning Internet industry is essential for continued innovation and economic growth in the U.S.,” said the association’s president and CEO Michael Beckerman. “The Internet should remain a place where users can access the content they desire at the speeds they pay for. Segregation of the Internet into fast lanes and slow lanes will distort the market, discourage innovation and harm Internet users,” Beckerman added.