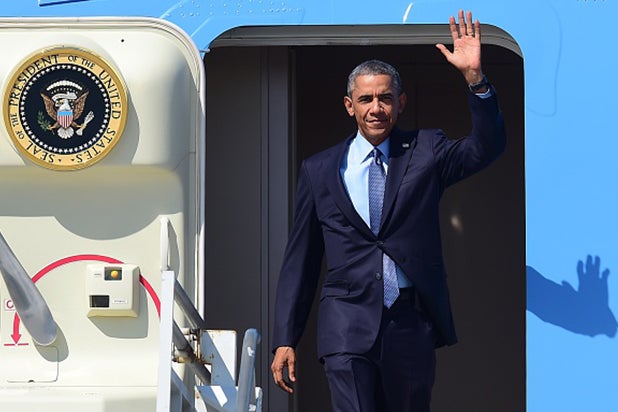 President Barack Obama touched down at Los Angeles International Airport Thursday at 1:55 p.m. for a series of events, including a fundraiser at actress Gwyneth Paltrow‘s house.

Mr. Obama disembarked from Air Force One and boarded Marine One, the presidential helicopter. His first stop was a visit to Cross Campus — an organization dedicated to helping startups and entrepreneurs succeed — in Santa Monica.

After arriving at 2:38 p.m., the President received a tour of the campus and gave a speech on the economy.

“This environment is representative of what’s best in America,” he said while praising Cross Campus for fostering the entrepreneurial spirit. After fielding a series of questions, the President reaffirmed his commitment to net neutrality, saying he was “unequivocally committed” to it. “It has unleashed the power of the Internet and we don’t want to lose that,” he added.

The President wrapped up his visit to Cross Campus around 4 p.m. then made a surprise stop at a phone bank in Venice for congressional candidate and California State Senator Ted Lieu (D-Torrance).

Mr. Obama arrived at the facility at 4:44 p.m. and greeted volunteers. “Thank you guys. We only have a few weeks left and California is right at the heart of the battle for control of the House,” he said. “The day-to-day work you’re doing … it makes a difference. That’s how I was elected.”

He also noted that Lieu had a “hard-fought primary,” and told him that “state senators make outstanding members of Congress.” He then left Venice for a fundraising cocktail reception and dinner at the Brentwood home of Oscar-winner Gwyneth Paltrow, in the Mandeville Canyon neighborhood.

The President will remain overnight in Los Angeles, and attend a Friday morning fundraiser for the DNC ahead of the 2014 midterm elections at restaurateur Michael Chow’s home. He will also designate a portion of the San Gabrial Mountains as a national monument in San Dimas, Calif.

As always, Mr. Obama’s visit will be accompanied by extensive street closures in and around the areas he will be visiting. In addition to closures, the Metro Bus Orange Line route 302/2 on Hilgard Avenue between Le Conte and Weyburn Avenues will be canceled from 11:00 a.m. on Oct. 9 through 4:00 p.m. on Oct. 10.

The president’s visit follows a trip to Los Angeles by Vice President Joe Biden, who was in the city Monday for a fundraiser at the home of Fox Filmed Entertainment chairman-CEO Jim Gianopulos. Along with Gianopulos and his wife Ann, the fundraiser was hosted by Peter and Megan Chernin, Barry and Wendy Meyer, John Law and Hope Warschaw, Jeffrey and Marilyn Katzenberg and .

After leaving Los Angeles at around 5:30 p.m. on Friday, President Obama is expected to make his way up to San Francisco for more fundraising events.