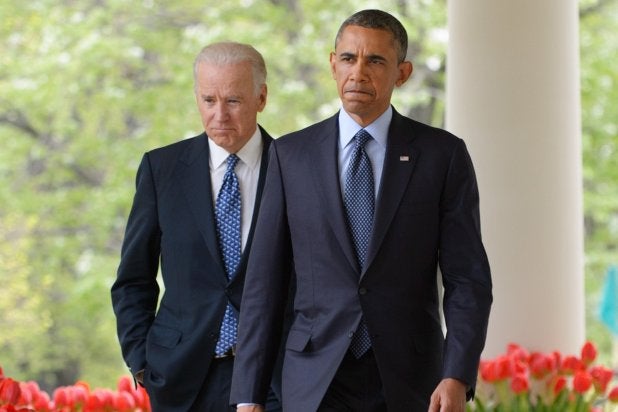 President Obama and Vice President Biden are hitting the road to raise funds for Democratic candidates and once again their fundraising calls include big attempts to tap into Hollywood money.

It’s the  third time this year Democrats are calling on the entertainment industry. In July, President Obama went to a Democratic fundraiser at the home of “Scandal” creator Shonda Rhimes. In May he attended another at the home of Disney Chairman Alan Horn.

On Monday evening, Biden is due to attend a cocktail reception for the Democratic Congressional Campaign Committee at the home of Fox Filmed Entertainment chairman-CEO Jim Gianopulos. Along with Gianopulos and his wife Ann, the fundraiser is being hosted by Peter and Megan Chernin, Barry and Wendy Meyer, John Law and Hope Warschaw, Jeffrey and Marilyn Katzenberg and James L. Brooks.

The fundraiser features a performance by Carole King and is being thrown in support of “Democratic Women for Congress.” House Speaker Nancy Pelosi, who has been working to raise money for Democratic congressional candidates in the midterm elections, is also due to speak.

The White House is set to release more details about fundraising amounts for the event on Monday.

On Thursday, President Obama himself is to attend a Democratic National Committee event that’s both a fundraising reception with the President and a dinner at the home of Gwyneth Paltrow.

Tickets for the cocktail reception start at $1,000 and for the dinner start at $15,000, with about 200 people expected at the reception and 50 at the dinner.

The Democratic National Committee fundraiser Obama attended at the home of Rhimes was co-hosted by Kerry Washington and ICM’s Chris Silbermann.  The May fundraiser at Horn’s home also included Barbra Streisand and her husband James Brolin.

The foundation’s nonpartisan nonprofit website PoliticalPartyTime.org tracks political fundraisers. Palmer said the Hollywood events let Democratic officials tap into “the cool kid factor,” wooing potential givers who want to be seen not only with top office holders, but amid the glamour of Hollywood.

Gibbs also said that the frequent California fundraisers aren’t entirely unusual. “There are definitely some ATM states–New York, up and down the coast of California and surprisingly Texas,” she said.

Republicans too have used celebrities to lure donations, but different kinds of celebrities, she added, pointing to appearances at various events by Ted Nugent.

While Hollywood money is one focus of the Democrats, the entertainment industry is far from alone in being targeted this year. Other Democratic fundraisers are due to take place this week in New York and San Francisco.

Democrats hoping to keep the Senate Democratic, win seats in the House and boost their chances in state fights that could help determine the future of the reapportionment have been working especially hard to boost fundraising for this year’s midterm elections.