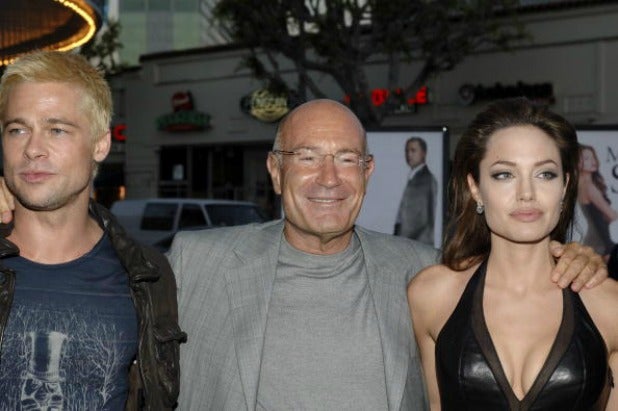 Arnon Milchan, a producer of such hits as “Pretty Woman,” “Fight Club” and “L.A. Confidential,” says he was an Israeli spy.

Milchan, who has produced more than 120 films since 1977, said on Israel’s investigative show “Uvda” Monday that even as he was negotiating Hollywood deals, he was also buying equipment and arms on Israel’s behalf.

Also read: ‘Fight Club’ Gets a Sequel – This Time as Graphic Novel

“Do you know what it was like to be a 20-something guy whose country decided to let him be James Bond? Wow! The action! That was exciting,” said Milchan, 68, according to Haaretz.

Milchan said that at the peak of his involvement, he was operating 30 companies in 17 countries. While his work for Israel has been reported before, Monday was the first time he spoke of it openly.

“I did it for my country and I’m proud of it,” said Milchan (pictured at the premiere of “Mr. and Mrs. Smith, one of the films he produced).

He said others in Hollywood were involved as well.

“When I came to Hollywood I detached myself completely from my physical activities to dedicate myself to what I really wanted — filmmaking,” he said. “Sometimes it gets mixed up.”

Milchan had a successful fertilizer business at home before he founded the New Regency film company. He worked with directors Martin Scorsese, Roman Polanski, Sergio Leone and Oliver Stone, as well as Robert De Niro, who appeared on “Uvda.”

De Niro said Milchan, “told me that he was an Israeli and he of course would do these things for his country — there was something with the little things that trigger a nuclear thing … I remember asking Arnon something about that, being friends. I was curious, not in an accusatory way, I just wanted to know, and he said, ‘Yes, I’m Israeli, that’s my country.'”

Milchan also conceded to using his Hollywood ties to help the South Africa’s apartheid regime burnish its image in exchange for helping Israel acquire uranium. Asked if his co-producing “12 Years a Slave” was a way of trying to atone, he nodded and agreed it might be.

Among other films Milchan produced were the “Alvin and the Chipmunks,” “Free Willy” and “Big Momma’s House” movies, as well as “JFK,” “Natural Born Killers” and “Brazil.”