Prince William spoke out Monday against the “racist abuse” being directed at Black English soccer players following Sunday’s loss to Italy in the Euro 2020 match.

“I am sickened by the racist abuse aimed at England players after last night’s match,” said a post signed by the Duke of Cambridge shared with his wife, Kate Middleton. “It is totally unacceptable that players have to endure this abhorrent behaviour. It must stop now and all those involved should be held accountable.” 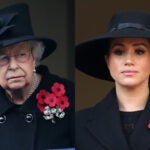 Boris Johnson, the prime minister of the United Kingdom, also spoke out on Twitter, writing, “This England team deserve to be lauded as heroes, not racially abused on social media. Those responsible for this appalling abuse should be ashamed of themselves.”

Prince William’s sister-in-law, Meghan Markle, trended briefly on the platform Monday morning as observers questioned why he hadn’t spoken out as forcefully against the racism she said she endured during her time living among the royals. Her public call-out of her time there was made alongside her husband, Prince Harry, and caused a considerable amount of drama for the family.

Even before she wed Prince Harry, Markle was subject to racist coverage in the UK press that Middleton was not subject to.