For movie producers, is it the end of the world as they know it?

You could get that impression on the 20th Century Fox lot over the weekend, when the Producers Guild of America attracted 1,100 of its members and guests to the guild’s second Produced By Conference, two days of panels, interviews, seminars and mentoring sessions during which the cold realities of production in today’s climate were hammered home:

Studios are harder to deal with than they used to be.

Certainly, the sessions also brought success stories and constructive advice and words of encouragement. But one of the common themes running through the weekend was clear: producing a movie was never easy, and now it’s getting harder. 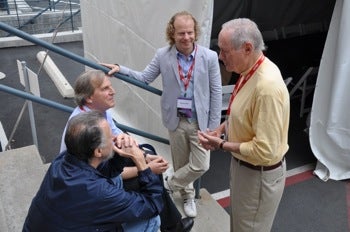 “The paradox right now,” said Marshall Herskovitz, the outgoing president of the PGA, “is that there’s less opportunity than ever before, but you can make a great movie for nothing. The tools exist to make a movie more cheaply than you ever could before, but it’s harder to break into the business.”

When asked about his low point in Hollywood, Larry Gordon, a 50-year veteran who once headed Fox and went on to produce “Die Hard,” “48 Hrs.,” “Field of Dreams” and many more, was blunt.

“Now,” he told the audience at the “Producing Blockbusters” panel. “I feel like a whipped puppy.”

His litany of complaints: studio interference is increasing; they seldom support the producer in creative conflicts; they want franchises, not fresh ideas; and in general they don’t respect the filmmakers.

“You always start out every movie thinking that it’ll be the greatest movie ever made,” said Douglas Wick (“Gladiator,” “Working Girl”) on a “Creative Alchemy” panel. “By the end, you’re just hoping to crawl across the finish line and not get sued or lose your relationship with the studio.”

For Gordon, that relationship appears to be in tatters. “Every time you make a movie, you get treated badly,” he said. “When Dick [Zanuck] ran this studio, and I think when I ran the studio, we treated people a little better than they do now.” He paused. “Let’s be frank: a lot better.”

Gordon didn’t mention movies by name, but he said he’d had “really bad experiences” on his last two or three films. (He may or may not have been talking about “Watchmen” and “Hellboy II: The Golden Army.”)

“I want to be treated with respect, and I think I deserve it,” he said. “That gets me branded as difficult. And I’ve just about had enough.”

He shook his head. “Do you think it means anything when you’re so furious at the studio that you hope your own movie fails?”

Producer Mark Johnson (“Rain Man,” “The Little Princess,” “The Chronicles of Narnia”), who was on the same panel, didn’t go quite that far – but he did bemoan the fact that Hollywood increasingly has a tunnel-vision focus on unoriginal, tentpole-type films, which he said that affected the way he viewed the recent downturn in domestic boxoffice.

“On one hand, I always wish the movie business and the boxoffice well,” said Johnson. “On the other hand, something in me is happy that a number of the big movies right now aren’t succeeding. The audience is starting to say no.

One problem, suggested legendary producer Richard F. Zanuck (whose career as a producer stretches from “Jaws” to “Alice in Wonderland”), is that the studios are now convinced that their audience is largely uninterested in fresh takes.

“The man on the street, if you ask him what he wants to see, he’ll tell you something he’s already seen,” said Zanuck. “He won’t give you an original idea. So we have to have those ideas, and start ramming them down their throats.”

Otherwise, he said, audiences will expect nothing but predictability and spectacle. “We have weaned an audience that only knows these big, spectacular and pretty bad extravaganzas. We’ve numbed the dramatic senses of our audience, and that’s what scares me.”

The complaints echoed across other panels as well. “Trying to get a big studio to embrace new ideas is not easy,” said “Avatar” producer Jon Landau in a discussion about transmedia. “No one ever got fired for not trying something.”

“One of the problems in this business is that people say no a lot,” said veteran producer and studio head David Picker when he moderated the “Creative Alchemy” panel. “And sometimes they say no without knowing why they’re saying no.”

Meanwhile, a panel entitled “Where’s the Money?” and devoted largely to independent film drew an overflow crowd to Fox’s Stage 8 – where the verdict was that wherever the money is, it’s not easy to get your hands on it, and if you don’t get most of your financing from overseas you’re probably sunk.

“Basically, if you look at the film business, you can draw a lot of similarity with the home mortgage business,” Comerica banker Jarrett Underwood told the audience. “There was too much money out there, too many movies, too many specialty divisions, and it was a bad economic environment.”

Bad, that is, for some people. “It was a good thing for producers,” he conceded, “because it was not hard to get your movie made. But that bubble has burst, and now you have a correction.”

Cathy Schulman, the producer of “Crash,” pointed to her upcoming film “Salvation Boulevard,” a comedy about religion in America, as an example of the kind of creative financing now needed to get anything off the ground.

The film, which stars Pierce Brosnan, Jennifer Connelly and Marisa Tomei, was budgeted at a modest $7.5 million. She secured $4 million in foreign sales on the strength of the cast, then shot in Michigan, which lures filmmakers with what she said was “an enormous 42 percent rebate” on above-the-line and below-the-line costs. She was left with a gap of about $2 million that she needed to fill with equity investors – and to do so, she had to recruit 32 separate investors, a huge number for such a relatively small amount.

The experience, Schulman said, could be summed up in a line that was echoed by many others across the lot all weekend.