When “The Hurt Locker” director Kathryn Bigelow arrived at the Hollywood Palladium for the Producers Guild of America Awards on Sunday night, she figured the location of her table – near the back of the floor, well behind the tables occupied by the “Avatar” and “Inglourious Basterds” filmmakers – was not a favorable omen.

“I saw where we were sitting and thought, that’s not a good sign,” laughed Bigelow after the show had ended, and after her film had scored a shocking upset and taken home the PGA’s top prize over her ex-husband Jim Cameron’s prohibitive favorite, “Avatar.” “I absolutely wasn’t expecting this.”

I was sitting one table away from Bigelow, with the producers of “30 Rock” – one of whom, David Miner, had already concluded the same thing.

“Last year, we were lucky enough to win, and our table was close, and right on the aisle,” he said with a griin. “Looking at where we’re sitting this year, I guess that means we’re not going to win.” 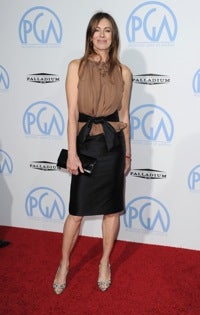 In fact, “30 Rock” did win – and, moments later, so did a visibly shocked Bigelow.

The victory, she said afterwards, was bittersweet: Mark Boal, the writer of the film and one of its producers, couldn’t attend the ceremony because his father had died the day before. “I’m really excited by this,” said Bigelow as she received congratulations from guests like “Up” producer Jonas Rivera, himself a winner in the Animated Theatrical Film category. “But I’m sad that Mark can’t be here.”

Other moments from the evening:

The show began at 5:30 p.m., which coincided with halftime in the football playoff game between the Minnesota Vikings and the New Orleans Saints. And the first presenter of the night, Greg Kinnear, wasted no time in referencing that fact:

“I’m so happy to be here tonight,” he said, “and not in the green room watching the NFL playoff game, to determine who goes to the Super Bowl.” A pause. “14-14 at halftime.”

And then an hour later, when Will Smith took the stage to deliver a special award to Sony Pictures executives Amy Pascal and Michael Lynton, his opening lines were succinct: “28-28 in overtime. Thought I’d share.”

And then … nothing. Apparently, none of the evening’s final presenters were football fans – or maybe they figured that anybody in the audience who was interested would have used their iPhones or BlackBerrys to find out that the Saints had won in overtime.

The competitive awards made headlines, but the five honorary awards provided some of the liveliest moments of the show. In Smith’s intro of Pascal and Lynton, for instance, he lauded the duo for caring about quality and supporting the environment – plus, he said, “again and again they show the wisdom and uncanny foresight to simply pay me what I ask for.”

Another highly successful actor who makes movies for Sony, Adam Sandler, lauded the pair in a video tribute:

“They treat me like a family member.” Pause. “A family member who’s made them over two billion dollars. But hey, my family has favorites, too.” 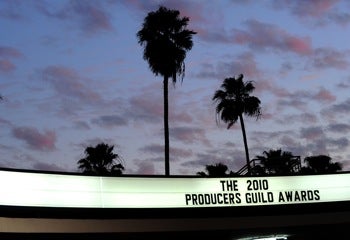 Accepting the Stanley Kramer Award for a film that “illuminates provocative social issues,” “Precious” director Lee Daniels at first appeared to be bashing the crowd when he talked about how “many of you in this room told me no” when he wanted to make “Monster’s Ball” and “The Woodsman,” and then said that when he looked at the crowd, he saw “very few faces of color.”

But then Daniels changed tone, and added, “But you have still embraced me.”

The funniest exchange of the night came from presenters Tom Hanks and Tim Allen, who went into a lengthy, seemingly improvised riff about David O. Selznick Award winner John Lasseter.

Hanks repeatedly cut off Allen, his co-star in the two “Toy Story” movies (and in “Toy Story 3,” out later this year, in which they reprise their roles as Woody and Buzz Lightyear, respectively). Finally, Allen leaned to the mike.

“I just want to point out,” he said, “that my toy outsells his a thousand to one.”

The pair introduced singer/composer Randy Newman, who saluted Pixar chief Lasseter as a man who “has made, or put his name on, nine successful movies in a row.”

If there was an undercurrent to the evening, it was the dividing line between real producers and those who merely put their names on projects. PGA president Marshall Herskovitz decried the way the producers credit had been “devalued, diluted and just given away sometimes,” and said it was the mandate of the PGA to change that.
And many of the winners, including reality TV producer Mark Burnett, alluded to how much real work they did – unlike, you know, those producers in name only.

“I’m proud to be a part of this guild,” said Burnett, calling producers “the first in and the last out of every project.” He ended by saying, “I can really say, no bulls—, I’m a real producer.”

Afterwards, guest mingled, sampled the buffet and buzzed about the “Hurt Locker” win, which seemed to surprise many of the producers in the room as much as it did the pundits who’d been predicting an easy “Avatar” victory.

The consensus: it means that “Hurt Locker” is a true, solid Oscar contender, but it doesn’t necessarily mean that it’s a frontrunner.

“Very interesting,” said an Academy official in attendance. “I’m not sure that we’re going to go the same way, but very interesting.” 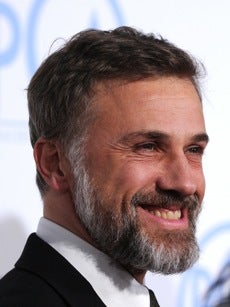 By the bar, “Inglourious Basterds” Christoph Waltz smiled and greeted well-wishers at the latest in a long line of awards shows he’s been to this year.

“I wouldn’t say it’s been surreal,” said the soft-spoken Austrian, who’s won virtually every supporting actor award handed out this year for his role as the Nazi colonel in Quentin Tarantino’s film. “But certainly, after 30 years knocking around the business, I had no reason to ever expect that anything like this would happen to me. I owe everything to Quentin.”

Among the things he owes to “Basterds,” he said, was his recent role in “The Green Hornet,” directed by Michel Gondry and starring Seth Rogen. It meant he’s been in Los Angeles for most of awards season – and to his surprise, he said, he likes the place.

“You always hear about scary it is going to Hollywood, and how bad it can be to work for big studios,” he said. “But I’ve had a great time out here. On ‘Green Hornet,’ we barely saw the Sony executives. And when we did, they had good comments and really cared about the movie.”

He shrugged. “I might have had some preconceptions about Hollywood before I came here, but now I wouldn’t mind staying for a while.”