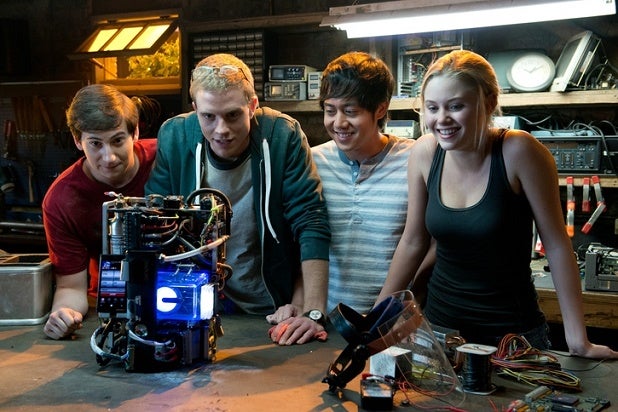 Any chance that new sci-fi thriller “Project Almanac” has of a strong opening during Super Bowl weekend looks to be in jeopardy.

The Michael Bay-produced film already faced stiff competition with Bradley Cooper‘s “American Sniper,” but now it is garnering mostly mixed reviews from critics, and currently sits at an underwhelming 32 percent on Rotten Tomatoes.

The story centers around a group of friends who discover the secret to time travel. However, things quickly spiral out of control when the ripple effects of their actions begin to take a toll on the present.

TheWrap’s James Rocchi was mostly kind in his review, in which he said, ““Project Almanac” has enough heart and brains to keep it steady even as the camera isn’t, and its wires-and-widgets variation on “The Monkey’s Paw” is very much informed and improved by the charm and capabilities of its young cast, making for a fun, fast and appropriately grim cautionary tale.”

Similarly, Drew Taylor of The Playlist said, “[One] of the film’s biggest charms is that it is totally comfortable with the fact that it is a time travel movie—and a found footage time travel movie at that—and then subverting or upending the rules of both the genre and the format.”

Others, however, were not so forgiving. Thomas Lee of the San Francisco Chronicle said the film is “[high] on fun but low on depth.”

“‘Project Almanac’ is told entirely from the perspective of a video camera, which instantly made me regret that I had eaten dinner before the screening. The film is directed by Dean Israelite but ultimately bears the imprint of producer Michael Bay, who has elevated visual overload and quarter-baked storytelling to a new art form.”

And then there were those who seemed downright offended by what they had watched. Brad Wheeler of the Toronto Globe and Mail opened his review with “Youth is wasted on the young, and apparently time machines are as well.”

“By the time the déjà-view dud screeches to an end, and you’ve just lost 106 minutes you’ll never get back.”

Likewise for Chris Cabin at Slant Magazine, who wrote “Throughout, the brazen strain to make the film look and sound as hip as possible is constantly felt.”

“David is driven by the thrill and challenge of invention, but the filmmakers are less interested in conveying this unique sort of stimulation than they are intent on delivering the same misogynistic, faux-modernistic jolts of trashy humor and labored plotting that typify the films of co-producer Michael Bay.”