On the episode, which aired Thursday, contestants were tasked with their first individual challenge: to design a streetwear look.

In an early segment, Ferguson was filmed talking to – or more accurately, at – fellow contestant Prajjé Oscar Jean-Baptiste, who is from Haiti, about the value of Black representation on the runway. 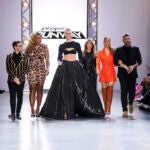 “We can’t be afraid to say the ‘racism’ word, and we can’t be afraid to say, like, ‘whitewashing’ and ‘appropriation.’ Like, you design because you grew up not seeing people like you on the runway,” Ferguson said to Jean-Baptiste as he worked on his design. “This should be a Black magic moment and, like, I feel like we missed the mark.”

Later, in a confessional shot, Jean-Baptiste admitted that Ferguson’s comments made him slightly “uncomfortable.”

“Oftentimes when you find people in support of our issues, as Black folks, it kind of comes off as if they know what our troubles are and they’re our saving grace,” he said to the camera. “And that’s usually a big misunderstanding in the community and how support comes.” 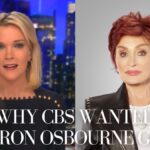 Also Read:
Sharon Osbourne Slams ‘The Talk’ Showrunners Who Fired Her: ‘Weak, Weak Women Who Didn’t Have a Backbone’ (Video)

However, Jean-Baptiste did not voice his feelings until another contestant entered the picture. Because his look contained references to Haitian culture, Jean-Baptiste and mentor Cristian Siriano decided that a Black model should wear it on the runway. This inspired Filipino-American contestant Kenneth Barlis to seek out an Asian model to wear his design.

When Barlis attempted to switch with Ferguson, who had been paired with the only Asian model in the room, Ferguson wasn’t happy.

“It’s so important to me to respect and acknowledge the fact that he wanted to design for his own culture,” she said in an aside. “I wouldn’t look like a woman of my word, and I would kind of look like an asshole, or, like, that bitchy woman if I said, ‘No, I don’t want to switch.'” 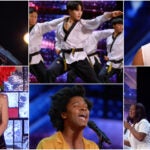 “You got involved in my business this morning. You made it extremely uncomfortable. You talk, talk, talk, yap, yap, yap, for the same s—, and then you just went and did it to him,” he said. “And I lost respect for you for that.”

Citing the “intensity of the competition,” Ferguson then decided to leave the show for the sake of her mental health.

Also Read:
Halyna Hutchins’ Husband Speaks Out About Her Tragic Death on ‘Rust’ Set: ‘I Don’t Think There Are Words’

Jean-Baptiste went on to win the competition at the end of the episode.