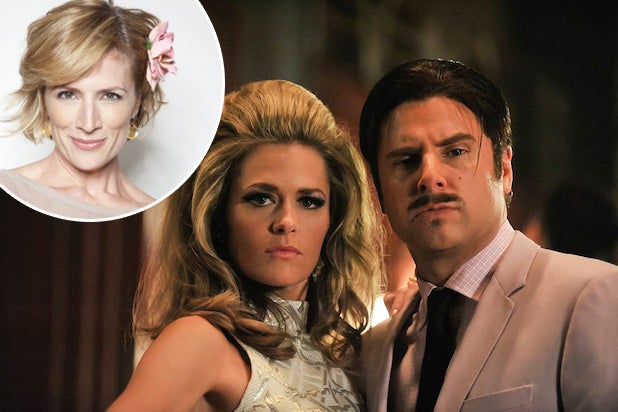 Kirsten Nelson says it look almost three years of lobbying the producers of “Psych” to give her an opportunity to direct an episode.

Nelson, who has played police chief Karen Vick since the 2006 pilot, should have been careful about what she wished for. She was informed last winter that she would be directing “1967: A Psych Odyssey,” an episode that includes flashbacks to the past, a musical performance by actor Dule Hill (hilariously referred to as the “cocoa crooner” in the episode) alongside several emotional changes for the series – which is currently in its final season.

“When they gave me this episode and were like, ‘Congratulations, you get a full one now,’ they kind of had this twinkle in their eye like ‘There’s this caveat, it’s a difficult one, it’s a big one.’ Come on!” she told the TheWrap.

When I referred to the episode as “complicated,” Nelson responded, “‘Complicated,’ I think, is probably a gentle word for it.”

Bouncing between the present and 1967, “Odyssey” follows Lassiter’s angling to replace Vick as chief by re-opening and trying to solve a cold case.

Nelson is thankful she had her co-star James Roday around to help. Not only had he directed episodes of the show before, Roday co-wrote “Odyssey.”

“Working with him and sharing ideas, doing our pow-wows afterwards was wonderful for me as a new director of this big episode,” Nelson said. “He was there during the shooting, and he would offer suggestions, he would not interject unless I asked him. And I did, I used him a couple of times knowing that he was there was a great anchor.”

While there’s a lot on “Odyssey” that certainly makes Nelson feel accomplished, she says it’s the quieter moments she’ll especially look back on proudly, which include a big moment for her own character.

“The quiet moments are a little gift when we get them, because we’re a comedy,” she said. “So when we’re able to stretch those muscles and I think everyone involved is really happy, and I was wonderfully touched that they kept the director of this episode in the family for this week.”

“I’ve been there since the beginning, we’re all good friends,” she continued. “I was able to talk to them as actors, as their friend, as a person who’s been there and a part of that history to kind of coax those gentile nuances and I’m really proud of their performances in those moments. But I think that’s what I’ll look back on and say ‘Yay, I’m glad you went the extra mile for that moment'”

The show’s very engaged fans — who lovingly call themselves the “Psych-Os” – have become very hyped about “Odyssey” and Nelson said that does add some pressure to the experience.

“I hope they like it, because that dynamism I don’t want turned on me,” Nelson joked. “I hope they like it, I really do, I think that they’ll be happy. It’s overwhelming the support sometimes. I’m thankful for ‘Psych’ and for the Chief, for getting me exposed that way. Nice to meet them, honestly. We call them ‘Psych-Os,’ but they’re not. They’re not that weird!”