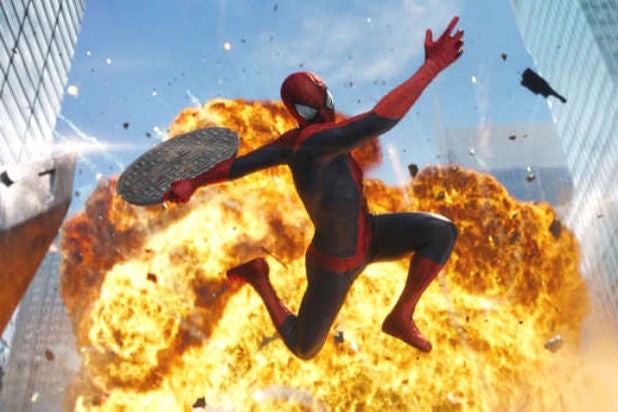 Warning: Spoilers ahead, if you have not seen ‘Amazing Spider-Man 2’

“The Amazing Spider-Man 2” is poised to swing to the top spot at the box office, but not with the help of overwhelming praise from critics.

Reviews have not been kind to Sony’s big-budget follow-up to 2011’s Spidey reboot from Marc Webb, calling out everything from the overstuffed plot to the under-developed villains.

And while fans will be much more forgiving to the film this weekend, it’s doubtful they will be able to completely overlook the film’s glaring problems. As Spidey’s latest sequel hits theaters, TheWrap takes a look at 6 things we can’t believe this $200 million tentpole got away with on its way to the big screen.

Before you read any further, be advised: Spoilers follow.

We can sorta deal with that the movie arguing that an evil dose of electricity can push one’s gapped teeth together. But what we can’t deal with is that no one red-flagged writers Roberto Orci, Alex Kurtzman and Jeff Pinkner for seemingly basing Electro’s arc on that of another villain from 1995’s underwhelming “Batman Forever.”

Electro sets a land-speed record for how fast he goes from comb-over dweeb to pun-happy super villain. His one-liners would make Joel Schumacher’s other much-maligned Batman movie, “Batman & Robin,” blush. (Example: “It’s my birthday, time to light my candles.”)

3. Still Trying to Make the Whole “Secret Origin” With the Parents Thing Work

The movie opens with a technically-proficient action sequence full of characters we care nothing about but should: Peter Parker’s parents.

Peter’s scientist father struggles to — wait for it — upload his top-secret research using wifi (which apparently existed 10 years ago when the scene takes place) all while aboard a jet that’s falling out of the sky. Full of incoherent fight choreography and muddy character motivations, what aims to be an attempt to provide the titular hero with meaningful backstory ends up padding the run time and, worse, boring the audience.

4. Harry and Peter Are Best Friends Because, You Know, Reasons

Sam Raimi‘s Spidey films put the friendship of Peter Parker and Harry Osborne at the center of its trilogy, devoting the better part of three films to the tragic story of best friends-turned-bitter enemies. “Amazing Spider-Man 2” gives us two scenes with Dane DeHaan’s emo Harry looking mopey and exchanging quips with Garfield’s Peter — and that’s it.

When Peter later tells his girlfriend that Harry is his “best friend,” the audience rightfully makes “wait, what?!” face in response to one of the film’s biggest misfires.

5. Killing the Only Thing We Care About

(Spoiler Alert! Stop reading — right now — if you don’t want to know a key plot point at the end of the film. Seriously. Still here? Ok… but you’ve been warned.)

The death of Emma Stone’s character, Gwen Stacy, is arguably the film’s best, most earned emotional beat. It’s a gut punch for both Spidey and the audience when our hero’s attempt to save Gwen gets her killed — just like in the comics.

But killing Gwen also kills the only thing worth caring about in these films: The relationship between her and Peter. With Gwen’s death taking the franchise’s emotional core with it, what the hell do audiences have to look forward to in the next film? (Answer: More puns.)

6. Cramming in the Sinister Six

The script randomly shoehorns in the Rhino (Paul Giamatti), who has nothing to do but yell a lot in a cartoon-y Russian accent, while setting up five more villains to pad Sony’s future franchises. As a result, one can see the studio fingerprints all over the final product — which is more concerned with setting up a “Sinister Six” movie than making this one the best it can be.