Jimmy Fallon is pretty sure that Donald Trump is feeling a little left out this week, after it was revealed Kim Jong-un and Vladimir Putin have been exchanging letters lately. The late night host joked that it was basically Trump’s two best friends hanging out without him.

On Monday, it was revealed that Kim and Putin have been in communication, discussing how they can strengthen their ties to each other, to the detriment of the United States. According to reports, Putin’s letter touched on how the two nations will “expand the comprehensive and constructive bilateral relations with common efforts,” with Kim’s response praising the increased “strategic and tactical cooperation, support and solidarity” between Russia and North Korea.

Hearing that, Jimmy Fallon thought of the implications stateside, particularly for Trump. 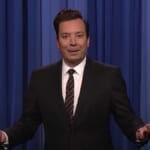 “Oh man, you know that irks Trump,” Fallon joked. “It’s like hearing your two best friends were hanging out behind your back.”

That said, Fallon was surprised that Putin and Kim were communicating at all, arguing that their mutual use for each other certainly isn’t proportionate.

“I’ll be honest, I’m not really sure Russia needs North Korea. It’s like the tambourine player saying ‘Hey, we should get the band back together!'” he added.

But Fallon still had some ideas for how Trump can make new friends here in the U.S. In fact, he speculated that the twice-impeached former president may have some good advice for President Joe Biden, after Biden signed the historic Inflation Reduction Act into law Tuesday.

“Trump heard and was like, ‘You’ll definitely want to sneak that one home when you leave office,'” Fallon joked, busting out his Trump impression once more.

You can watch the full monologue from “The Tonight Show” in the video above. 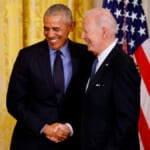