For as much as Paramount+’s “Queenpins” is a story about a very real crime, there’s a whole lot of comedy happening in the film — including some good old fashioned poop humor. But for star Paul Walter Hauser, that moment was actually one he really didn’t look forward to filming.

As Ken Miller (Hauser) and Simon Kilmurry (Vince Vaughn) stake out Connie (Kristen Bell) and Jojo’s (Kirby Howell-Baptiste) comings and goings, they find themselves sitting in a car all night long. In the morning, they follow the women to their base of operations bright and early. Unfortunately for Ken, this coincides with his regularly scheduled morning bowel movement. But, because he takes his job very seriously, he refuses to get out of the car and potentially reveal himself — inevitably leading to him defecating in his pants, right there in the passenger seat.

“You hear actors talk about how they dread doing like a sex scene or something intimate. For me, like, I’ll probably never have a sex scene in a movie or TV show. But I do have a crapping your pants scene,” Paul Walter Hauser told TheWrap. “And that was my thing that I dreaded. And I wasn’t sure how the comedy would play out. So I just leaned into the reality of it. I tried to play it straight, and know that the script is funny. I don’t really have to add anything.” 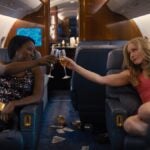 Though he may have dreaded the scene as much as a potential sex scene, it doesn’t mean that Hauser didn’t have fun doing it. The real challenge ended up being just holding himself together next to Vince Vaughn.

“What was difficult was on the day, Vince Vaughn kept throwing out improv lines,” Hauser said. “Like, like he’s plugging his nose and he’s saying, you know, ‘Go wipe your butt on the grass like a puppy’, stuff like that. He would just throw out and like, it’s so difficult not to laugh at that. I was pinching myself off camera like a parent scolding a child for roughhousing during church or something. Like I literally had to parent myself to not laugh during that scene, because it was so funny.”

Really, Hauser enjoyed every scene he had with Vaughn, because of the dynamic between their two very different, but equally serious-about-their-job characters.