“Queenpins” has arrived in theaters and on Paramount+, telling the story of the country’s largest counterfeit coupon scam. Indeed, the movie is inspired by a true story, but just how closely does the film follow the events and people it’s based on? Let’s break it down.

In the movie, Kristen Bell and Kirby Howell-Baptiste play Connie and Jojo, a pair of best friends from Phoenix who love extreme couponing. Upon realizing that they could get a coupon for a free item sent to them just by complaining to the manufacturer, they come up with a plan to smuggle and steal cases of those coupons, to then sell to people.

Together, they set up a website called “Savvy Super Saver,” and eventually make millions of dollars — in turn, costing multiple manufacturers millions of dollars. And in terms of the crime itself, “Queenpins” stayed pretty loyal.

In July 2012, police in Phoenix, Arizona arrested three women in a coupon scam that cost manufacturers roughly $40 million. The coupons were sold on a site called Savvy Shopper Site, to which interested parties had to be referred or invited directly to use. 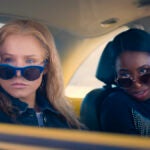 Marilyn Johnson, 54, Robin Ramirez, 40, and Amiko Fountain, 42, were taken into custody, and in a press conference, police said a search warrant served resulted in the seizing of $40 million worth of coupons and $2 million worth of assets from the women’s homes, including $240,000 in vehicles, 22 guns, and a 40-foot speedboat.

“The opulence and the money was the equivalent of drug cartel-type of stuff. That’s the type of money they had,” Sgt. David Lake, who led the Phoenix Police Department’s investigation, told KPHO at the time.

In the movie, the women are fictionalized as Connie (Bell) and Jojo (Howell-Baptiste), who end up living much the same way. They also come into possession of guns, cars and boats in an effort to “clean” the money they’ve made from selling coupons. Because they aren’t exactly hardened criminals, they think that the money they’ve made through their shell company has to be laundered, so they bought all these high priced items with the intent to just immediately resell them.

But that’s just Connie and Jojo. They were just two normal women, who felt taken advantage of by major corporations, and genuinely wanted to help other women and families who were struggling. As far as the real women involved, stars Kristen Bell and Kirby Howell-Baptiste admit that they never actually met or spoke to the actual minds behind the crime to learn what sparked it.

“No, not at all,” Bell told TheWrap. “I was very excited when I saw on the front page of the script that was based on a true story. And after reading the script and falling massively in love with it, because it was such a grounded comedy, I did some research about these women. But Aron [Gaudet] and Gita [Pullapilly], as storytellers — our writer and directors — have added so many specific elements of storytelling to this about what Connie’s career was, what Jojo’s career was, their circumstances in life in order to create a story that you would root for, and then it sort of goes into the nonfiction aspect that it sort of wasn’t maybe as necessary to take on a ton of the real life characteristics of the women.”

Much the same can be said for Paul Walter Houser, who plays Ken Miller, the loss prevention officer that uncovers and eventually busts Connie and Jojo’s scam. He also focused more on the character aspect of his part, rather than talking to anyone actually involved in loss prevention.

“You know what, I bet if a better actor were playing Ken Miller, there’d probably be a little fine tooth combing involved with the world of loss prevention. But I I sort of didn’t approach it from an occupational standpoint,” Houser told TheWrap. “I just decided I really wanted to play the curmudgeon nature of the character. And where does that curmudgeonly frame come from? And I think it comes from loneliness and feeling isolated and kind of under-utilized or under-appreciated. And I just want to play the humanity of the guy while adding some comedic elements to him.”

In “Queenpins,” it’s Ken Miller who pleads with the FBI to get involved, but in the end, he ends up working with Vince Vaughn’s postal inspector character, with the reasoning being that the crime was technically committed via snail mail. In real life, the FBI did get involved, along with the non-profit Coupon Information Center.

Fountain and Johnson were both sentenced to three years’ probation after pleading guilty to a single count of counterfeiting. Ramirez pleaded guilty to illegal control of an enterprise, counterfeiting and fraud. She was sentenced to two years in prison, with credit for 287 days’ served, and seven years of supervised probation. She also was ordered to pay restitution of up to $5 million.