“Pulp Fiction” superfans, get out your Bad Motherf—er wallets: Quentin Tarantino announced on Tuesday that he is auctioning off never-before-seen material from the 1994 film in the form of non-fungible tokens, or NFTs.

In a news release, Secret Network announced that the seven NFT packages will contain uncut scenes, handwritten excerpts from the original script and exclusive commentary by writer-director Tarantino which will reveal “secrets about the film and its creator.”

The never-before-seen or heard assets are one-of-a-kind and will only be visible to the owner of the NFT.

“I’m excited to be presenting these exclusive scenes from ‘Pulp Fiction’ to fans,” Tarantino said in the statement. “Secret Network and Secret NFTs provide a whole new world of connecting fans and artists and I’m thrilled to be a part of that.”

Initial auctions for the pieces will be held on OpenSea, “the world’s largest NFT marketplace.” The NFTs are hosted on the blockchain platform Secret Network, self-described as “the first Layer 1 blockchain with privacy-by-default for applications.” The sale is supported by Secret Network’s development company, SCRT Labs.

Among Tarantino’s filmography, “Pulp Fiction” stands out as a fan favorite and smashing success, grossing $213.9 million success against a $10 million budget. The film won the Palme d’Or at Cannes Film Festival and earned seven Oscar nominations. Tarantino took home the statue for Best Original Screenplay at the 1995 ceremony. 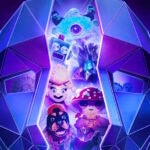 “Pulp Fiction” may hold the distinction of being the first secret NFTs, but it isn’t the only hit film to hit the crypto markets. MGM Studios and platform Veve are partnering on a James Bond NFT following last month’s release of “No Time To Die.” Warner Bros. announced the sale of 100,000 “Matrix” NFT collectibles ahead of the December premiere of “The Matrix Resurrections.”