While the internet was decidedly not a fan of Jimmy Kimmel’s extended Emmy bit — where he lay “dead” on the stage amid Quinta Brunson’s historic Emmy win and speech for Outstanding Writing for a Comedy Series — the “Abbott Elementary” star and creator herself was not as bothered.

Speaking to reporters backstage after the moment, Brunson said, “I know Jimmy Kimmel, and I don’t know, I felt like the bit didn’t bother me that much.”

“I don’t know what the Internet thinks,” she quickly added.

“Honestly, Jimmy gave me my first big late night spot and was one of the first people to see ‘Abbott.’ One of the first people — he Instagram messaged me that he saw this comedy and thought it was one of the greatest comedies of all time,” she continued. “He was so excited it was going to be on ABC. So I think at that moment, I was just really happy that it was Jimmy up there. I consider him one of the comedy godfathers. I’m a huge fan of Will Arnett, so I was wrapped up in the moment.”

“I don’t know, tomorrow maybe I’ll be mad at him,” she added. “I’m going to be on his show on Wednesday, so I might punch him in the face. I don’t know, we’ll see what happens.” 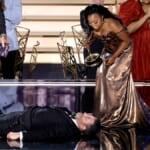 During an extended bit, Kimmel was dragged onto the Emmys stage like someone who was passed out as Arnett introduced the nominees for the category. Despite Brunson inviting him to get up during her speech, the late night host just gestured with a thumbs up, which many users on social media found “disrespectful” and “irritating,” as well as upstaging a woman of color during an important moment in her career.

“Abbott Elementary” won a total of three Emmys, including Outstanding Supporting Actress for Sheryl Lee Ralph and Outstanding Casting. Brunson’s win for writing made her only the second Black woman to win in the category, after Lena Waithe for “Master of None.” “Abbott” will return for its second season on Sept. 21 on ABC.