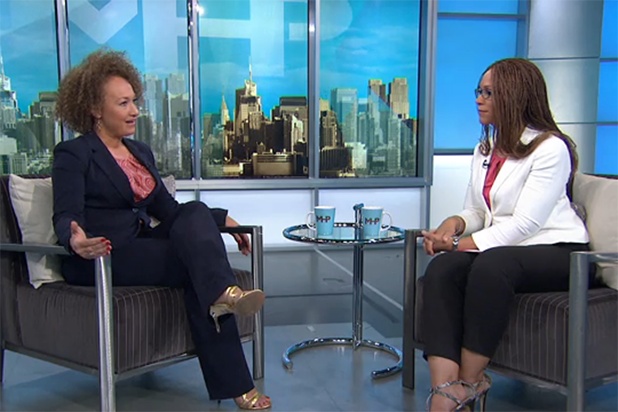 “I don’t think so, you know.” Dolezal responded in a preview of the interview. “I don’t think that anything that I have done with regards to the movement, my work, my life, my identity — I mean it’s all been very thoughtful and careful.”

She continued: “Sometimes decisions have been made for survival reasons or to protect people that I love.”

Dolezal, former president of the Spokane, Washington, chapter of the civil rights group, has faced intense scrutiny and public ridicule for saying she is African-American while her Montana birth certificate identifies her as Caucasian.

She resigned from her NAACP post on Monday and broke her silence Tuesday morning in an interview with NBC’s “Today” show, telling host Matt Lauer she has identified as black since she was five years old.

“I was drawing self-portraits with the brown crayon instead of the peach crayon, and black curly hair,” she said.

In her sit-down with MSNBC’s Harris-Perry, the disgraced civil rights leader went into detail about what it means to her to be black.

“It means several things,” she said. “First of all, it means that I have really gone there with the experience, in terms of being the mother of two black sons. Really owning what it means to experience blackness.”

She also talked about her discrimination lawsuit against historically black Howard University– which she sued in 2002 — before reinventing herself as a black person.

Dolezal, who then went by her married name of Rachel Moore, claimed in the lawsuit that she was denied a teaching post and scholarship money because she was a pregnant white woman, court documents obtained by The Smoking Gun said.

Dolezal told Harris-Perry she decided to take legal action after a school official told her: “You have white relatives so they can probably afford to financially assist you.”

The Montana native received a master of fine arts degree from the Washington, D.C. school the same year that she filed the lawsuit. However, the District of Columbia superior court dismissed the case, and in 2005 the decision was upheld by an appeals court.

Her MSNBC interview will air during “All In” with Chris Hayes on Tuesday at 8 p.m. ET.

Watch the preview video below.