ABC News’ Rachel Scott put her time in Geneva, Switzerland, to good use Wednesday when she asked Russian President Vladimir Putin directly, “What are you so afraid of?”

In a press conference held after Putin met with President Joe Biden, Scott said, “President Biden has said that he would respond if cyberattacks from Russia do not stop. I’m curious: What did he tell you? Did he make any threats? And a quick follow-up, if I may, sir. The list of your political opponents who are dead, imprisoned or jailed is long. Alexey Navalny’s organization called for free and fair elections and an end to corruption, but Russia has outlawed that organization, calling it ‘extremist,’ and you have now prevented anyone who supports him to run for office. So, my question, Mr. President, is what are you so afraid of?”

Putin replied through a translator that he has already spoken about “various so-called ‘foreign agents’ and about people who are positioning themselves as the non-systemic opposition.” He claimed Navalny’s party has an “extremist” character and pivoted to discussing the civil unrest seen in America following the police murder of George Floyd. He called out the Black Lives Matter movement by name. 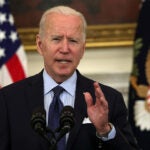 Also Read:
Biden Gets Testy With Press Over Putin Meeting: ‘If You Don’t Understand That, You’re in the Wrong Business’ (Video)

“We feel sympathy for the United States of America, but we do not want that to happen on our territory and we are doing our utmost to not allow it to happen. ‘Fears’ has nothing to do with anything,” Putin said.

Scott followed up, saying he hadn’t answered her question.

“If all of your political opponents are dead, in prison or poisoned, doesn’t that send a message that you do not want a fair political fight?” she asked.

Online, Scott’s peers in media and observers of the conference cheered her direct line of questioning, calling it a “masterclass” and branding her a “badass.”

See a video clip of Scott at today’s press conference below.