Rachel Zegler will be Disney’s next live-action princess, taking on the role of Snow White in a remake of the animated classic. And if her past tweets are anything to go by, it’s a role she was born to play.

After the news broke on Tuesday, Zegler took to Twitter in her excitement, marveling at the fact that she was trending because of the announcement. “I HAVE MANIFESTED MY ENTIRE LIFE I THINK I THINK,” the actress tweeted.

Adding to the hype of fans, Zegler then dug up some old tweets she had posted, that are now adorably prescient. One came as recently as Monday, in which she wrote “I love you disney princess cinematic universe,” after praising Halle Bailey for playing Ariel in Disney’s upcoming live-action remake of “The Little Mermaid.” 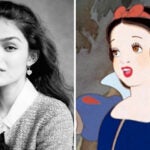 It’s possible, and in fact likely, that Zegler knew she had been cast as Snow White at this point. Or at least, that’s how the actress made it seem, when she quoted her original tweet by writing “*rubs hands mischievously.*”

But really, Zegler has been tweeting about her love of Disney, and her desire to become a Disney princess for years. The actress also resurfaced photos of herself dressed as Ariel in 2017 for a stage performance of “The Little Mermaid.”

She then posted a video of a trip to Disney World, where she met Snow White and took photos with her iconic wishing well behind Cinderella’s castle.

So clearly, Zegler is more than ready to play the fairest of them all.