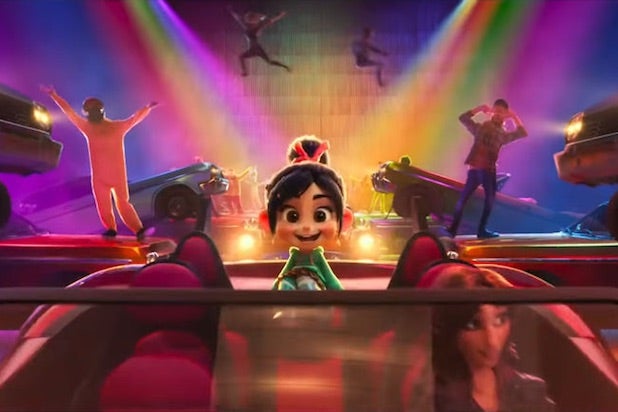 Some of the funniest moments in “Ralph Breaks the Internet” come when Wreck-It Ralph’s pint-sized sidekick, Vanellope von Schweetz, encounters a room full of Disney princesses and discovers her own inner princess. She does so in song, “A Place Called Slaughter Race,” that is both an ode to a gritty video game in which she feels at home and a spot-on parody of the kind of longing princess songs that Alan Menken wrote for Disney animated classics like “The Little Mermaid,” “Beauty and the Beast” and “Tangled.”

So even though Henry Jackman wrote the score to the film, directors Rich Moore and Phil Johnston turned to Menken to write the song, with lyrics by Johnston and Tom MacDougall. Johnston and Menken discussed the process in separate interviews.

Also Read: Does 'Ralph Breaks the Internet' Have a Post-Credits Scene?

What did you do, tell Alan Menken, “We want you to write a parody of every Disney princess song of yours that has ever won an Oscar?”
PHIL JOHNSTON Not really. When we were talking about it ourselves, we said, “OK, we set up this song, and Penelope is going to find a puddle of water and start singing. It shouldn’t be a joke song, it should be just as earnest and desirous as any Disney princess song. It should feel like an Alan Menken type ‘I want’ song.”

We kept calling it an Alan Menken-type song, and our VP of music said, “You guys keep talking about Alan Menken. I’ve got his number, you want me to call him?” “Yeah, why didn’t we think of that?”

Alan, what was your reaction when they came to you?
ALAN MENKEN The way it started was there was a song I wrote over 10 years ago, a big opening number for a project that was going and then it went back into development. The song became one of those lost classic numbers that people loved and would listen to the demo. And Tom [MacDougall] found the track for that, wiped away the lyrics and said, “This music is perfect.” So they started with that piece of music, added their lyrics to it and said, “What do you think?”

I said, “You can’t use that song, because I might still use it. But I’ll go back, knowing that that’s the style of Menken that you want, and I will give you a brand new version of that.”

Also Read: Stan Lee Didn't Get to See His 'Ralph Breaks the Internet' Cameo Before He Died

How collaborative was the song from that point?
MENKEN There was a lot of back and forth. The song evolved over a period of about six weeks. I would go back to them and say, “We already used this word here, can we change to this word?” “Oh sure — and can you slow down this dance section?”

The song is almost a spoof of every Alan Menken princess song – but you don’t approach it that way when you’re writing it, do you?
MENKEN Well, I know that I’m reaching into “Alan Menken” as a genre, and I know that I’m reflecting other moments that have been associated with my music at Disney, and it’s being done in a kind of subversive but emotionally true way. There’s some deconstruction in there, but in general it’s a classic moment like “Belle” or “True Love’s Kiss.”

It’s not as much of a spoof as what I did for “Sausage Party,” but it’s along the same lines. I’m really creating a very sincere musical framework for a lyric that has a longing to it, but also a lot of winks. It was fun to me to get back to that form, and I wanted to make it as much of a Menken song as I could. So there was no reinventing the wheel on this one – it needed to be very clear what the frame of reference was, and the music got to be the straight man for the lyrics to bounce off.

Is it strange to be asked to write in, as you say, “Alan Menken” as a genre?
MENKEN On the one hand, it’s flattering. When they say, “Give us something that’s like that thing you did before,” you hope that in your career you’re gonna have that kind of impact.

On other other hand no, it’s not my favorite kind of assignment. I’d love to have something new at Disney animation, if they ever want me to come back.