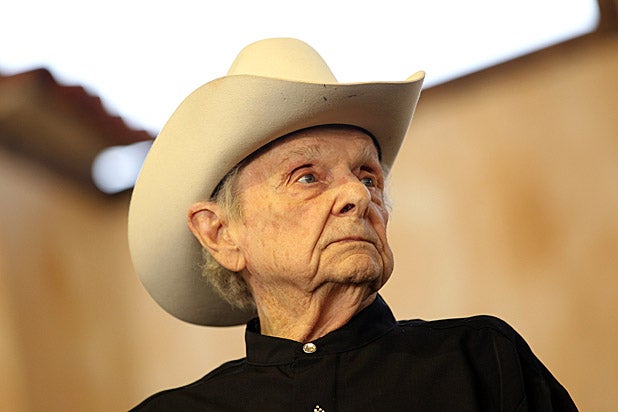 Among his countless accomplishments, the Appalachian music patriarch was featured on the soundtrack for the Coen Brothers’ film, “O Brother, Where Art Thou?” singing a chilling a cappella folk version of “O Death.”

Stanley was born and raised in amid the coal mines and forests of southwest Virginia, where he and his brother, Stanley, formed the Stanley Brothers and the Clinch Mountain Boys in 1946. Their father would sing them old traditional songs like “Man of Constant Sorrow,” while their mother, a banjo player, taught them the old-time clawhammer style, in which the player’s fingers strike downward at the strings in a rhythmic style.

The brothers were heavily influenced by Grand Ole Opry star Bill Monroe, fusing his rapid rhythms with the mountain folk songs from groups such as theFamily.

Their hit songs included “The Lonesome River,” “White Dove” and “Finger Poppin’ Time.” In 1951, they re-popularized family favorite, “Man of Constant Sorrow,” which was also later recorded by Bob Dylan.

After Carter Stanley died from complications of cirrhosis in 1966, Ralph continued to perform solo after being flooded with fan letters begging him not to retire.

He went on to receive an honorary doctorate of music from Lincoln Memorial University in Harrogate, Tennessee, in 1976, and he was often introduced as “Dr. Ralph Stanley,” according to USAToday. He performed at the inaugurations of U.S. Presidents Jimmy and Bill Clinton, was given a “Living Legends” medal from the Library of Congress and a National Medal of Arts presented by the National Endowment for the Arts and President George W. Bush. He became a member of the Grand Ole Opry in 2000.

That same year, Stanley was discovered by a new generation of fans when “O Brother, Where Art Thou?” — starring George Clooney, John Turturro, and Tim Blake Nelson, with John Goodman, Holly Hunter — became a smash hit for Joel and Ethan Cohen.

“I wish it had come 25 years sooner,” Stanley told the AP about his newfound fame. “I am still enjoying it, but I would have had longer to enjoy it.”

He is survived by his son, Ralph Stanley II, and grandson, Nathan, both of whom are musicians.