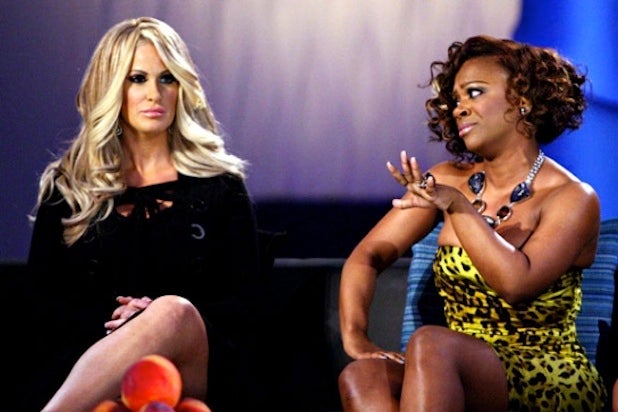 Bravo star Kim Zolciak is celebrating a win in court over her former “Real Housewives of Atlanta” cast member Kandi Burruss (as well as attorney and cast member Phaedra Parks, who represented her).

On Saturday, Zolciak took to Twitter to express her happiness over winning the case brought on by Burruss for copyright infringement and unpaid compensation for her work on the 2009 song, “Tardy to the Party.”

“The truth always prevails,” Zolciak wrote to her more than 744,000 followers on Twitter.

Later, she presumably wrote more about the win on Twitter: “Revenge can be bitter sweet but if you sit back and watch karma it can be pure entertainment”

“It is Ordered and Adjudged that the plaintiff take nothing, and the action be, and the same hereby, is dismissed without prejudice.”

In the lawsuit filed in March in United States District Court in the Northern District of Georgia, Burruss and co-writer Rodney Richards asked for damages stemming from copyright infringement on Zolciak’s part.

According to court papers, Judge Duffey found that Burruss didn’t sufficiently prove copyright infringement and that he didn’t have the jurisdiction to rule on damages:

“The Court concludes it does not have jurisdiction over Plaintiffs’ unjust enrichment, accounting and constructive trust claims based upon the sales of the Sound Recording, and these claims are required to be dismissed.”

While claiming to have co-written and produced the song, which was captured on “The Real Housewives of Atlanta,” Burruss reportedly was only paid $4,000 for her work and didn’t have a royalty agreement in place. The dance single ultimately sold 102,000 copies, according to the suit.

In response, Zolciak filed for a dismissal of the lawsuit and accused Burruss of filing it for publicity.

Last season, Zolciak left “The Real Housewives of Atlanta,” but continues to star on the Bravo spinoff, “Don’t Be Tardy.” Burruss returned for the show’s sixth season, which returns to the cable network on Sunday, Nov. 3 at 8/7c.