Real life couple Rebecca Romijn and Jerry O’Connell are teaming up to co-host CBS’ “The Real Love Boat” this fall.

The husband-and-wife team will guide viewers through what CBS has dubbed a “dating adventure series” that’s inspired by the classic 1970s scripted television show “The Love Boat.”

“After years of consuming, arguing about and dissecting unscripted television, hosting a reality series where a group of singles look for love while aboard a Princess Cruise ship, seemed like a dream come true,” Romijn and O’Connell said in a joint statement. “When we heard it was aboard ‘The Real Love Boat,’ that dream got an iconic theme song: ‘We promise something for everyone.’”

The show will brings singles together as they sail the Mediterranean on a luxury cruise ship while looking for love. “Destination dates, challenges and surprise singles will test the couples’ compatibility and chemistry. Like the beloved original scripted series, the indispensable crew members, including captain and cruise director, will play pivotal roles in the matchmaking and navigation of the romantic (and sometimes turbulent) waters ahead,” per CBS. 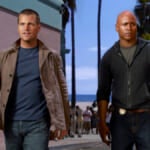 After nearly one month at sea, the winning couple will dock at the final port and win a cash prize and a trip courtesy of Princess Cruises.