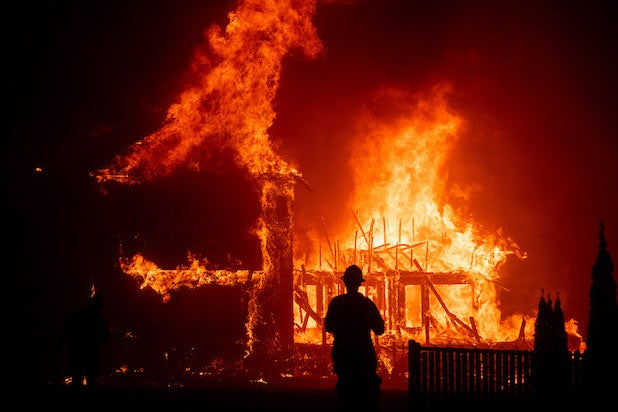 “Rebuilding Paradise,” the new documentary from Ron Howard, promises something in its title that for most of its running time seems very hard to deliver. The prospect of rebuilding after the devastating wildfire that destroyed most of the Northern California town of Paradise feels almost impossible for that city’s residents – and, in fact, the sequences that give the movie its power often as not deal with the losses that can never really be rebuilt or fixed.

And while the film reaches for and finds moments of healing and rejuvenation, it’s easier to walk away from it feeling anger at the causes of the devastation than hopefulness for a community that is still sifting through the ashes.

Still, Howard is a skilled enough filmmaker to highlight that hope just enough to keep “Rebuilding Paradise” from being overwhelmed by loss. His first nonfiction film to deal with current events and real people after a string of music-focused docs that included “The Beatles: Eight Days a Week” and “Pavarotti,” it surveys destruction and manages not to despair.

The film premiered at the Sundance Film Festival in January and became eligible for the documentary Oscar by being booked at that festival and Tribeca, with National Geographic Documentary Films putting it on video platforms and in select theaters on July 31.

At first, “Rebuilding Paradise” covers much of the same ground as the 40-minute Netflix doc “Fire in Paradise,” which made it as far as the 10-film shortlist in the Oscars’ Best Documentary Short category last year, but fell short of a nomination. Using harrowing cell-phone footage shot by people trying to escape the 2018 wildfire that swept through their foothill town of 26,500 and destroyed almost 95% of its buildings, it drops you in the middle of an inferno far more horrifying than the ones in Howard’s 1991 drama “Backdraft” because it was real.

The bulk of the movie is about the aftermath, but those opening 15 minutes or so are hard to shake, and they hang over everything that follows. And they should, because all the townspeople we meet – from the former town drunk who became mayor to the school superintendent determined that the high school class will have graduation on its field to the school psychologist clearly fighting her own PTSD – are haunted by what they saw and the wreckage of their town.

The images are striking – not just of the burned structures, but of things like a full-grown deer sitting on a rare patch of green lawn in front of one of the few houses in a neighborhood that remained standing. Howard lets the loss sink in and is in no hurry to get to the rebuilding; he’d rather linger on a town that appears all but dead while he explores the causes of the fire. (Faulty equipment from Pacific Gas & Electric started the fire, but climate change helped create the conditions that made it so deadly.)

As the film goes on, viewers will likely know the beats it’s going to hit as the town tries to recover from disaster, but there’s nothing wrong with a certain amount of predictability – and these days, there’s something timely and potentially fulfilling about any recovery from calamity.

But the recovery is hardly easy. FEMA complicates things, PG&E declares bankruptcy, Donald Trump flubs the town name and calls it “Pleasure” when he comes to Northern California, safe drinking water might be available for years and the idea of a true rebuild seems like a pipe dream for and to many of the people we see onscreen.

And yet there’s that title, “Rebuilding Paradise,” holding out some hope that eventually, the town will begin to claw its way out of the disaster. When it comes, it comes slowly – and for every small triumph, there’s a family that splits up or an unexpected death. To his credit, Howard doesn’t pull away from any of this; in a way, the heart of the movie lies in the things that will never come back, even if its lesson is that you absorb the losses and

For most of its running time, this is a clean, clear job of telling a complicated story, and one that finds the directing moving beyond the uplifting biographical storytelling of his previous documentaries. That makes it all the more disappointing when “Rebuilding Paradise” seems to wind down with a bit of too-easy optimism in a speech about rising from the ashes and then a rushed montage of disasters around the world, hammering home a point about climate change that had already been made more subtly and artfully.

It’s a surprising bit of clunkiness at the end of a movie that until then has never been clunky, but it’s not what you’ll remember about “Rebuilding Paradise.” In a time of turmoil, it’s enough to know that rebuilding isn’t easy, but neither is it impossible.